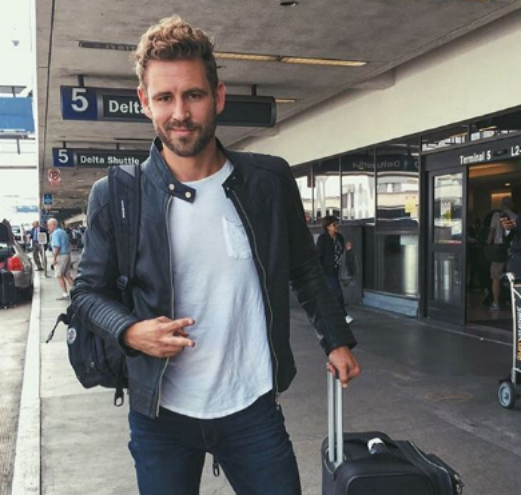 Rewind several years ago when Kristina, now 26, was a young, sweet and appearingly naïve Russian girl vying for Nick Viall’s heart in Season 21 of The Bachelor.

Since then, Kristina may have spent too much time getting her heart broken on multiple seasons of Bachelor in Paradise. She remained sweet and well-liked when she dated Dean. Unfortunately, Dean wound up in a nasty triangle and Kristina seems to get her heart broken into a million pieces. This season on BIP, Kristina seems to be harder, bitter, jaded, bruised and downright mean. Unfortunately, she hasn’t seemed to have smartened up when it comes to the guys playing the field in Paradise.

Initially, she and Caelynn feuded over Blake who had been with both girls within 24 hours at Stagecoach.

They Say Everyone Has a Twin

On this week’s episode of BIP, she goes on a one-on-one date with newcomer Luke S. Luke can seriously be Nick Viall’s doppelganger. On their date, she tells Luke that he is “nicer, cuter and easier to talk to” than the former Bachelor. Ouch!

No wonder why Nick is stirring the pot with a vengeance.

Nick Viall is now speaking out about Kristina. He isn’t holding back either.

“I honestly am probably more annoyed with the show airing it. I’m not surprised Kristina had that to say. In fairness to Kristina, I probably wasn’t easy to talk to on my season with Kristina since she decided to tell me that she slid into my brother Sam’s DM before our season of ‘The Bachelor.’

I don’t know what her intentions, but she was just like, ‘Yeah, I slid into your brother’s DM and I was talking to him a little bit,’ And I was like, ‘That’s super weird.”

Nick also called it “a bit frustrating” to see not only Kristina but other former Bachelor contestants “throw their leads under the bus.”

He Said, She Said

Kristina hit back with a few claims of her own. She shared her side of the situation with a video captioned, “Let’s clear this up once and for all.”

“One, Nick Viall, you don’t know me, the person being portrayed on TV, you can’t say with certainty that’s who I am because you don’t know me. Second, I was the one to tell you that your brother messaged me, not the other way around. And third, you were the asshole when I was talking to your guy, your ‘wingman’ and you sent him a message saying, ‘Dude, f–k her,’ in reference to me. So disrespectful.”