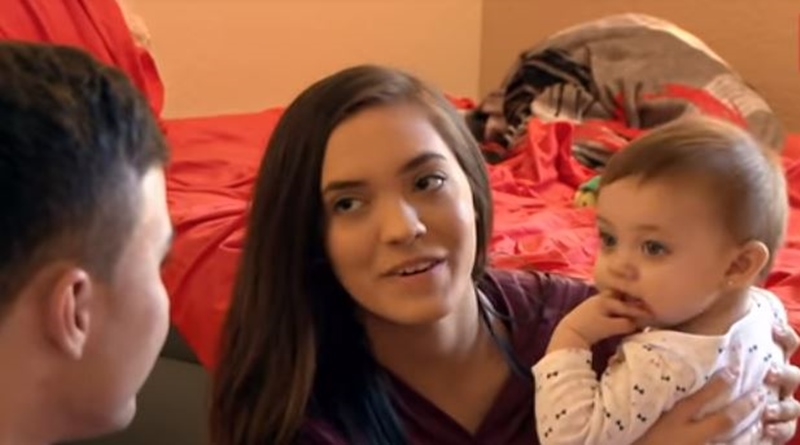 Unexpected fans freaked out at Chloe Mendoza for saying that Max doesn’t need addiction therapy. In fact, TV Shows Ace noted, “He might be jailed, but it’s too late for him to change that. But, Chloe basically tells him, “Bye-bye daddy…My life will not end if we break-up.” Chloe adds, “My life will go on,” noting, “I can still do things by myself.” But if he goes back on drugs and fails a test, then jail’s where he’ll end up. So fans wonder what’s up with her thinking?

Fans of the TLC show saw Todd, Max’s dad concerned for his son. So, he felt the best way to help him stay free of drugs is to go to therapy. Plus, Max is really trying to do the right thing and applied for a job. After Todd asked Chloe to take Max to his interview, she agreed, albeit reluctantly. But the conversation became heated when Todd seemed to think she’d also take him to his therapy. Well, she not only objected to driving him but felt it wasn’t necessary. That’s amazing since she’s laid down the law on what will happen if he relapses.

Chloe reacted once again, as though she’s the victim and texted Todd accusing him of bullying her. The Unexpected star seems to think that somehow Max may be giving in to his drug addiction’s unlikely. Plus, it looks like her and her mom hate on him for his theft of credit cards from a friend’s grandma. Fans feel that was wrong, but he’s trying to come right. He’s trying to help himself. And, after all, Chloe’s not blameless as she fell pregnant. So. it’s not like she never made a mistake in her life, either.

Chloe’s showing almost unbelievable immaturity, fans feel. She seems quite happy that just because Max stopped doing drugs that he’s cured. Possibly, she thinks her ultimatum about “Bye Bye daddy,” did the trick. Of course, beside themselves, fans took to Twitter to discuss the whole thing. These days, Unexpected critics tend to gravitate to Twitter. That’s because Instagram’s working hard putting the lid on horrid comments. But, most comments on Twitter make very good sense.

Blown away, @Vita_laEbby commented, “#unexpectedtlc Chloe needs to stfu. She’s the main one who listens to her mom & how in the hell are you going to tell someone who was on drugs that they don’t need therapy. Regardless of if he’s doing right, that’s a form of treatment to help him to not go back.” This got backed up by numerous others including, @cathaus_, wisely asked, “Chloe asking Max if he really needs therapy?? But you want him to be a good dad??? Let him do what he needs to do to be that good dad!”

A pointed remark from @amazongd noted, “Omg Max‘ s Dad is trying to get Max the help he needs and Chloe is [like] do you really need therapy? Yes, he does! He is spiraling down a dangerous path and I am impressed with his Dad for taking the steps needed to save his son. I hope he does the help he needs.”

Chloe, don’t you dare discourage Max from getting help. It’s never the wrong time to get support for any stage of addiction #Unexpected #Unexpectedtlc

How vital is drug addiction therapy for Max?

Drughab.com points out some major factors as to why someone like Unexpected‘s Max needs therapy. Firstly, stress can easily trip them up. And, right now, between Cloe and her mom, he’s under a lot of stress. As one Twitter user mentioned, Chloe’s family stress him a lot so they wouldn’t be surprised “if he does take Xanax.” Then the website notes, “Recovery is a lifelong process of improving health and well-being while living independently.” They add that recovery’s far more difficult than stopping drugs. And, they need as much support as they can get.

Right now, it certainly doesn’t look like Max is getting the support he needs from Chloe. Some fans feel if he ends up back on drugs, then she should grow up and recognize she’s a contributing factor. So, far Chloe’s showing few signs of growing up and accepting some responsibility for the whole mess.

What did you think about Chloe Mendoza saying that Max doesn’t need therapy? Did that freak you out as well? Sound off your thoughts and experience with drug addiction recovery in the comments below.

Amy Roloff Is Excited About Her Wedding, But Is Chris Marek?
‘LPBW’ Tori Roloff Slammed For Insensitive Comments About Lilah
Is Lifetime’s ‘Secrets Of A Marine’s Wife’ Based On A True Story?
Emma And Alex Make A Dating Profile For Their ‘Bossy’ Sister Anna
Lauryn ‘Pumpkin’ Shannon’s Baby Boy’s Name: When Will Fans Meet Him?