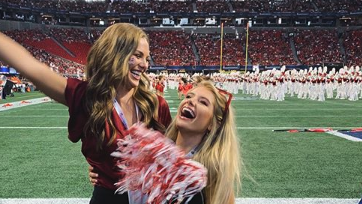 Hannah Brown may be focusing on Dancing with the Stars, but that doesn’t mean Bachelorette drama isn’t still following her around. Things didn’t work out with Tyler Cameron and now she’s revealing her last message with him.

Hannah and Tyler Don’t Make it

Hannah Brown asked Tyler Cameron on a date at the end of her season of The Bachelorette. This was after she and Jed Wyatt broke up. Initially, everyone was super excited to see Hannah and Tyler together finally. However, that didn’t last long.

Shortly after Hannah asked Tyler out, he was seen out and about with Gigi Hadid. It sounds like the two are actually getting pretty serious. That must mean that Hannah and Tyler won’t be happening.

According to Entertainment Tonight, Hannah’s not spending time hung up on Tyler after this though.

“I think we were both single and it is his decision to do whatever makes him happy and so I want my own happiness,” Hannah said. “I’m moving forward.”

drinking and reminiscing with @cosmopolitan. 🥂🙃 I’ve got a link in my bio you should totally check out.

That’s so good for her. After everything she’s been through, she deserves happiness. She shouldn’t settle for someone just because he’s conveniently there. She needs to focus on herself for now and worry about a guy when she gets to that bridge.

She is revealing her last message to Tyler though. Apparently, she texted him when his dad was sick. Since then they haven’t talked. Now, she’s just wishing him well which is really the most she can do. There’s no telling why Tyler didn’t choose Hannah over Gigi. Its got to be for the best though.

In the end, it’s just good that Hannah is no longer with Jed. Let’s be real, he was bad news. Hannah just needs to go out and kill it on the dance floor. Leave all the boy drama behind! They aren’t worth her precious time anyway.

DWTS should be pretty exciting for viewers. Even Hannah admits the Beast is out during this so it will be full of excitement for viewers.

“Bless my partner’s heart, he has to deal with The Beast a lot, I don’t really cry. I… put people in their place where I probably shouldn’t, because I don’t even know what I’m talking about, but I think I do.”

What do you think of Hannah and Tyler not being able to make it work after The Bachelorette? Who do you want to see her with? Let us know in the comments below.

In the meantime, be sure to watch new episodes of Bachelor in Paradise every Monday and Tuesday night. There’s a lot of relationships blossoming and you don’t want to miss out!