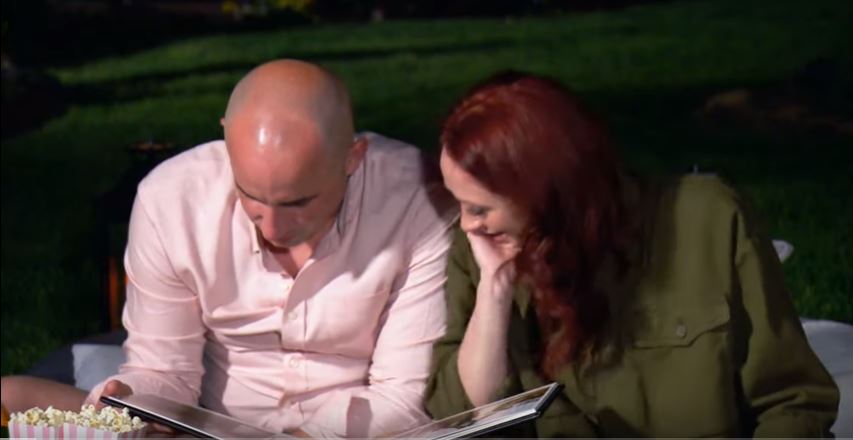 Any longtime viewer of Married at First Sight or even just the current Season 9 can attest that Jamie Thompson and Elizabeth Bice brought the fire, the fury, and the tenderness from the start.  Unfortunately, the couple couldn’t always get out of their own way and communicate, despite very deep, and early, feelings for each other.

It wasn’t long before Married at First Sight’s Dr. Pepper Schwartz rushed to the couple’s apartment for an intervention, advising that no matter how tense things became, neither partner could leave the premises.  They could sleep in different rooms, they could refuse to speak, but they could not depart from the marriage, not even for a night.

Fans saw in this week’s August 28 13th episode, “Bear With Me,” that Jamie Thompson had not heeded that advice.  Before the couples’ retreat in the Black Mountains of North Carolina, Elizabeth Bice revealed that Jamie had been out of their apartment for four days.  When they met for ice cream, things didn’t start off smoothly.  Jamie again had his defenses up, saying that he enjoyed the “peaceful” time away with “no criticism.”  Elizabeth let slurping with her straw be her response, but when she did ask, “Do you want to come home?” Jamie Thompson answered in the affirmative.

The couple packed for their rustic cabin stay and the spirited Married at First Sight match seemed content and close through the getaway, even when accosted by a black bear and a pesky spider.  Jamie Thompson still seemed very committed to the relationship on the episode and in an August 28 feature from Newsweek.   The newlywed sought advice from Greg Okotie during a cookout and the stable groom reminded that even after bumps and mistakes, there’s always time to change course and improve.

Jamie Thompson would change a few things but didn’t want to change much about his bride, Elizabeth.

Can the couples actually handle sleeping in the wild? 🐻🌲 #MarriedAtFirstSight pic.twitter.com/pE8556e21V

No comparison in spirit

While reflecting with his fellow grooms, Jamie did confess that 100% is “a strong number” when considering the certainty of wanting to spend forever with Elizabeth.   Just a few weeks ago, however, he confessed to Pastor Cal Roberson, “What am I going to do?  Go back to dating and saying that no other girl compares to what she was?”  Even under the siege of one another’s sensitivity and insecurity, Beth Bice and Jamie Thompson seem drawn to their connection beneath the surface.  Jamie appreciates that the experts explained from the outset that “they would pair us with somebody that we needed, not somebody that we wanted.”

Decibel levels and coffee-table damage notwithstanding, Thompson adds, “I really wasn’t disappointed about anything about Beth.”  Several viewers might recall him bringing up “accountability” more than once, and reaching back to past infractions.  It’s refreshing that Jamie Thompson can look back on the process as fulfilling, and he loves the full-on energy from Elizabeth.   “She is vibrant and genuinely excited to live everyday life,” Jamie continues. “I need that spark more than anything,” he speaks in the present tense.

Still a hurdle or two

Jamie Thompson spent a lovely day in a “salt cave” with his bride, even tasting the ground, but preview clips show him accusing Beth of not being a “sexual being,” which seems odd considering their coupon book of intimate experiences and past history.

Marriage is always about learning, and about learning to let go, too.  Jamie admits that “once I was able to let some things go, I could appreciate my partner.”

Simple things seem to please the couple most.  They enjoy each other’s company “lounging on the couch watching our favorite show” or doing something outdoors (minus bears).  The couple put a pause on intimacy to focus on trust, communication, and friendship in this week’s installment, and Elizabeth praised that the retreat had reminded her of “how cool you are” to her husband.

There is bound to be tension, suspense, and still a few heartbreaks but lots of learning and love, too.  After the cameras stop rolling, married life begins and Jamie Thompson just might have learned that for himself.   He does now that “change is hard, but it’s rewarding.”  He calls his Married at First Sight experience “crazy rewarding” too.