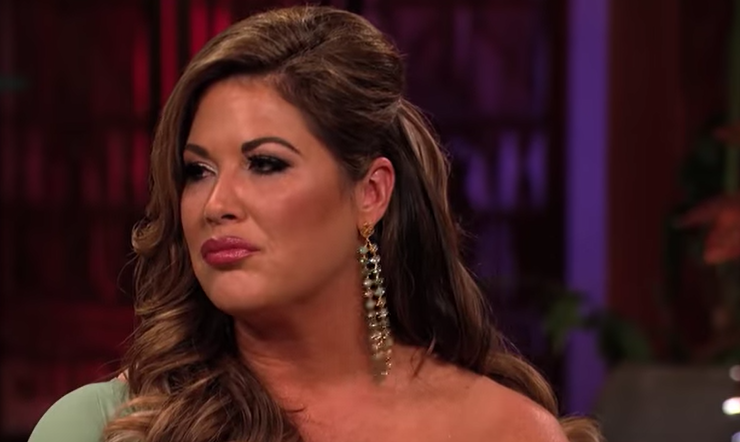 The Real Housewives franchise is no stranger to marital problems. The reality stars often have to go through the breakdown of their marriage in front of the world. This is no different for RHOC star Emily Simpson when it comes to her relationship with Shane Simpson.

Emily Simpson who shares three small children with her husband is having a hard time with anxiety over their marital problems. Rumors have plagued the reality star about trouble in paradise for a few weeks now. On People an article reported the star said, “I feel like I barely get through each thing I’m supposed to do. I feel like I’m barely being a good mom, I’m barely being a good wife.”

I want to thank all of you amazing people out there for being so kind, loving and supportive! You all truly have hearts of gold! . In honor of your kindness and in honor of celebrating SELF-LOVE, I want to do a Give-Away to two lucky followers! ❤️❤️ Two people will WIN a pair of gold heart earrings from one of my favorite jewelry designers @sukibijoux . All you have to do to win is: 1. Comment below and tell me what you LOVE about yourself! I want to hear a lot of self love going on! 2. Follow @sukibijoux 3. Tag two friends on @sukibijoux post about this giveaway . Good luck my gorgeous friends! I’ll announce two winners tomorrow night after the new episode of RHOC PST 🍊🍊 on @BravoTV . #rhoc #heart #love #selflove #loveyourself #heartsofgold

Emily Simpson told her co-star on Tuesday’s episode, “I’m just really overwhelmed and I’m really sad right now and I’m kind of acting like a crazy person and I don’t know why.”

Gina had some tough love for her best friend when she said she didn’t know what the problem was. “You’re a f-ing mess,” Kirschenheiter said, “I feel that I sense this is something more and you’re not addressing it.” Gina has been dealing with her own marital issues as she’s currently getting a divorce from her husband.

In her confessional, Gina said she thinks Simpson can’t pinpoint the issue because she doesn’t really want to. She said she thinks something might be going on with Shane.

The Reality Star Is Holding Onto Secrets With Her Marriage

Emily Simpson is keeping details of her relationship away from the other women. While filming was going on Shane was studying for the bar exam and staying in a hotel. They hadn’t talked in ten days. Emily surprised him with a dance in a burlesque revue but he didn’t approve of it and hurt her feelings.

Emily is mindful of how reality television can cause people to start a mob mentality of taking sides. She said, “Shane and I, we’re in a difficult situation right now. “I’m reluctant to share things about my marriage because I don’t want people to jump on a bandwagon of bashing my husband.” Hopefully, Shane and Emily will be able to come to some sort of agreement within their marriage. There’s surely more to come as this season of RHOC rolls through to the finale.