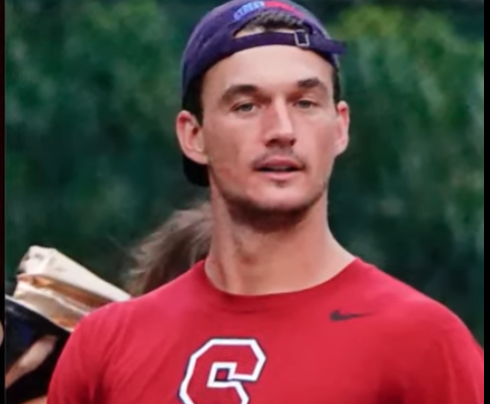 Gigi Hadid had a sweet date for the VMAs this year. It was her sister Bella! It was the date she had after the show wrapped, however, that caused the most buzz. For weeks, she’s been seen hanging out with Tyler Cameron from The Bachelorette.

The two reportedly met up after the VMA’s to hang out at a little more of a private venue according to E Online. At the Moxy Hotel for Taylor Swift’s Republic Records party, they greeted each other with a kiss and Taylor Swift hugged him.

Tyler Cameron is spotted with Gigi Hadid at VMA after-party

Tyler Cameron was one of several celebrities at Taylor’s after-party. Also in attendance were Haley Kiyoko and Ansel Elgort. The friends around Gigi seemed to be familiar with Tyler. This led party-goers to believe the two are going to get serious soon because her friends approve. There’s been speculation they were starting to see more of each other since they’d been photographed together so much. One person there said, “Tyler Cameron and Gigi were touchy feely and very cute all night.”

Both Tyler Cameron and Gigi Hadid just got out of very public relationships. Cameron was in front of the world on The Bachelorette and Gigi was with Zayn Malik of One Direction. That’s why they’re probably just taking it slow and having a good time. According to Morning Picker, Zayn is selling the apartment close by to Gigi’s. Maybe he doesn’t want to chance running into her and Tyler.

Does The Bachelorette star like the attention their relationship is getting?

The two had fun at the party and an insider said they, “were dancing all night. He had his arms wrapped around her and kissed the back of her neck. They were inseparable.” PDA doesn’t seem to be something the two models shy away from.

According to People, a source says Tyler Cameron isn’t the shy one in the relationship. They said he likes the buzz he’s getting from being with Hadid. A source close to the couple said the VMAs was their first public event and things have, “just started getting serious.” According to Elle, the source told ET they are very similar. “Things are easy for Tyler and Gigi, because they’re both extremely kind and want the same things in life.”

One thing is for sure, they will continue to get a lot of media attention if they keep going out. Fans just can’t get enough of their relationship.