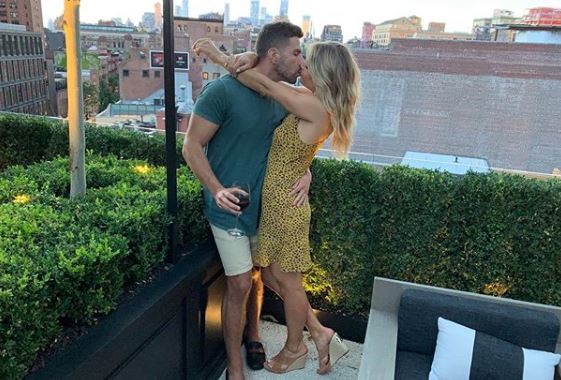 Bachelor in Paradise will air the big wedding of Chris Randone and Krystal Nielson tonight. It turns out that these two almost didn’t get married. ET shared what went down.

In a new interview, Chris and Krystal talk about the hard time they had before their wedding. Here is what Chris had to say.

“It’s one of those things where it’s like an earthquake, the plate tectonics, so out of place, everything was shaking. We finally dug deep and had these deep-rooted conversations that finally allowed us to feel stable and that allowed us to go ahead and really identify the importance of understanding one another. We were both having issues in ourselves that we just needed to work on it and come together as one.”

The couple tied the knot

Chris Randone and Krystal Nielson did end up getting married though. It sounds like the wedding went amazing. They did mention that John Paul Jones ends up causing a bit of drama at their reception, though. It will air tonight on Bachelor in Paradise.

How beautiful is this shot? We’re so grateful to return to the spot of our first date together @vidanta for our wedding. Perfect venue, perfect sunset for our first night as husband and wife! #krystalgetsgooses #glittergoosewedding #bachelorinparadise 📸: @crisbernalphoto

These two did bond over the fact that they were both villians on their season. It worked out for them. Luckily, Krystal and Chris were able to work through all of their issues. She said that she tried on 26 dresses before finding the perfect one. Neil Lane also helped the couple with their wedding bands. This makes total sense considering that he helped Chris pick out the engagement ring. This couple is also already talking children, so listen for that announcement soon. They do want at least two children.

Are you shocked to hear that Chris Randone and Krystal Neilson almost didn’t get married? Share your thoughts in the comments. Don’t miss new episodes of Bachelor in Paradise on Monday and Tuesday nights on ABC.