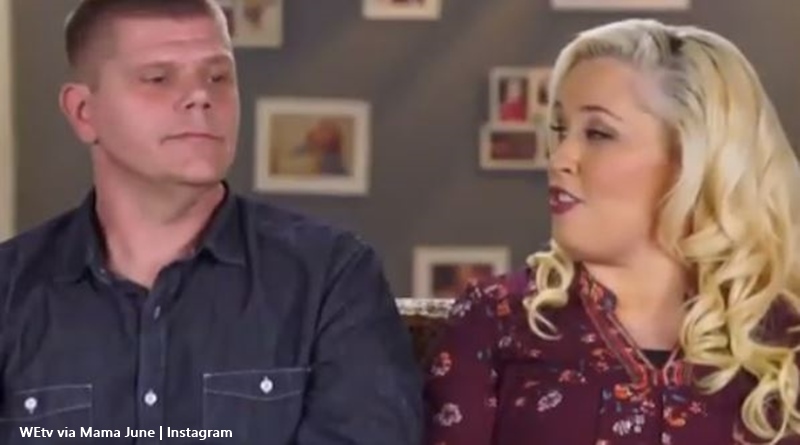 Mama June Shannon fans watched the last season of From Not to Hot and watched June disintegrate. Now, it looks like her home’s gong the same way and it got neighbors in a fury. In fact, they made reports to the Homeowners Association as it’s bringing down the tone of the area. They claim it’s rather “trashy” and yes, that extends to the “dumpster on her front lawn,” according to TMZ.

According to photos obtained by TMZ, there really is a big dumpster on the lawn. Plus loads of trash bins overflowing with rubbish. Remember the crash that Geno had when he drove into the garage door? Well, it seems that never got fixed. Plus throw in a broken and boarded window and it looks abandoned. The neighbors noted that the “AC unit mounted on a window… [is] a huge no-no, according to the HOA.”

Recently, Mama June and Geno held a garage sale they announced on Facebook Marketplace. TMZ noted that people who went to the house saw lots of furnishings gone. Plus, allegedly stuff was strewn all around. Others mentioned they saw what looked like syringes and drug paraphernalia. It’s not clear if June sold the stuff to move out, or just needs cash. Luckily for young Alana, she’s not living there at the moment.

TV Shows Ace reported that Alana moved out and lives with her sister Pumpkin these days. Thankfully, Sugar Bear agreed to temporary custody after June’s intervention failed. Back then, Alana said she wanted to attend proper school. So far, reportedly she’s doing okay in the better environment. In fact, on her latest IG posts, Mama June’s youngest daughter looks clean and happy with her niece.

In the last season, we saw Alana crying about the state of her mom. Actually, she’s refused to move back in with June until she sorts out her life. Meanwhile, June allegedly won’t change her rather sad life around for Alana. It seems that Geno’s all she cares about these days. And, fans know Geno’s probably even more ‘trashy’ that the home these days.

Can a custodial sentence save Mama June?

Popculture reminds us that back in March Mama June ended up arrested at an Alabama gas station. “Shannon was arrested for felony possession of crack cocaine and misdemeanor possession of an apparent crack cocaine pipe,” they noted. Plus, Geno Doak got charged with similar offenses and with “domestic violence.”

It’s becoming obvious that staying with Geno’s not healthy for Mama June. However, she may get a custodial sentence. Some fans feel this might be the best thing for her. Inside, she could get access to the correct treatment for her apparent addictions. Plus, it would remove Geno’s influence from her daily life. What do you think? Sound off your thoughts in the comments below.