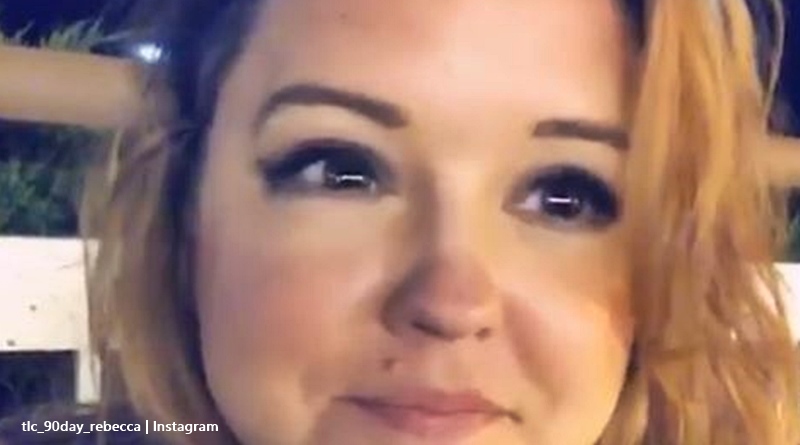 90 Day Fiance: Before the 90 Days aired again Sunday night. Viewers felt saddened and shocked to see Rebecca and Zied clash over her clothes. Plus, it came after his friends embarrassed her. They asked her to show them her tattoos, which she did, reluctantly. Now, as she said, tattoos are not common with women in Tunisia. So, their fascination almost jumped out the screen to embarrass all of us. Later, she disrespected Zied’s culture and promises to do it yet again.

Fans of Rebecca know from her IG and TLC bio that she’s quite independent-minded. She trained as a motorbike mechanic and works as a private investigator. She’s funny, attractive, and quite sweet. But even her usual stalwart fans didn’t laugh along with her after the show this time. The clash with Zied came after an uncomfortable encounter with his friends. First, they asked her how old she was. Zied tried to stop her from answering. But, instead of flipping them off with a joke, or saying something like, “never ask a woman her age,” she told them.

Their shock hammered out, as they all sat there looking like they just found a pole dancer in the cake box. Next, they asked her to show them her tattoos. The 90 Day Fiance star knows women don’t wear them in Tunisia. But, she showed them anyway. It embarrassed her. So, the initial impression was she knows how awkward social situations can be in a foreign country. Being a victim of cultural embarrassment, but later putting Zied in a similar situation seems mind-boggling to some fans.

To recap briefly, she’d been in Tunis a few days. The couple planned to go out for some drinks, dancing, and maybe a meal. But, her choice of clothing shocked Zied. She wished to wear a black shirt that exposed her tattoos and much of her v-neck area. As Zied explained, he couldn’t let her go out like that. He felt it too revealing for his country. He said it’s “too s*xy.” He also repeatedly told her he knows his own country.

Well, that just made Rebecca mad. As she said to the camera, nobody was going to tell her what to wear. Zied knew that she would attract attention and possibly lewd comments. Very tense, Rebecca started ordering him around and insisted on wearing it. However, she did take along her jacket. From Zied’s perspective, no doubt, other Tunisian males would look down on her, and him as women there dress more conservatively. Anyway, bristling, they finally sallied forth.

Rebecca brings her Moroccan-ex into the picture

Rebecca seemed to justify her disrespect of Zied’s culture because her previous relationship was controlling. So, she won’t be controlled again, she tells the 90 Day Fiance camera. Not a great idea then, to hook up with a man in controlling culture. Of course, the evening turned into a disaster. They argued a lot about how Zied didn’t want her to wear ‘revealing clothes.’

Then in the club, in front of everyone, she took off her jacket. Zied nearly had a heart attack. The other women and men in the club grew obviously embarrassed. Zied looked like he wanted to disappear through the floorboards. Then another Tunisian man started staring at Rebecca’s tattoos and Zied got enraged. In fact, it nearly came to a fight. On her Instagram, Rebecca said the 90 Day fiance film crew got concerned about the situation. But, she put herself in it.

Over on her Instagram, Rebecca agreed she got out of line. In a post, she said, “you’re absolutely right,” when someone mentioned her disrespect for Tunisian culture. However, it seems she regrets what she did. Later she noted that she should have put her jacket back on. But, it seems this is not the last time we see tension arise through cultural disrespect. Rebecca commented,  “I was wrong. It’s not the last time I’m going to do this. Sadly. 😢.”

What did you think about Rebecca failing to respect Zied’s culture? After all, she’s in his country where things are different. If this continues, as she promises, will this be the end of Rebecca and Zied? Sound off your thoughts in the comments below.

Remember to check back with TV Shows Ace often for more news about 90 Day Fiance: Before the 90 Days.