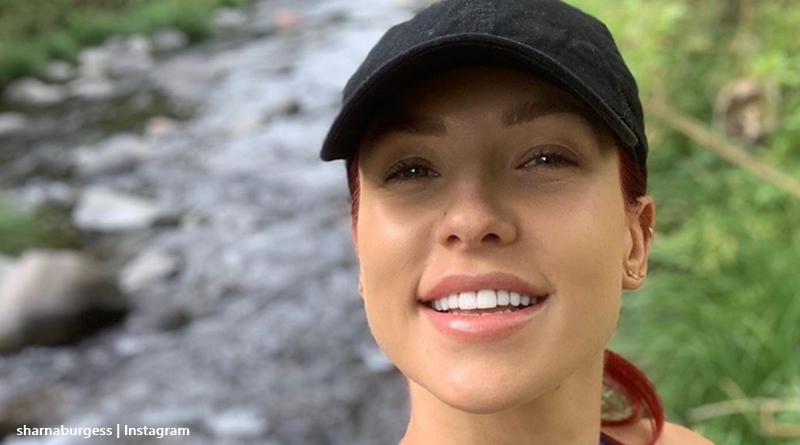 DWTS finally released the full cast and pros after some delay. Many fans got such a shock to see that Sharna Burgess won’t be back for Season 28. After close to nine years, it seems she cemented herself into being a permanent fixture. Over on her Instagram, fans discuss theories and speculations arise as what happened.

Sharna took to her Instagram with a long and mostly cheery message, but in there, we see a hint she never left voluntarily. And, fans hope it’s not the end. As @instajules28 noted, “I’m soo hoping this is a hint that maybe Sharna will be back as the 4th judge since Jules has AGT now?! 😬 Maybe?? 🙏.” However, that could be reaching a bit. Others remain upbeat, with @stangerach posting,  I think I hear Broadway calling 😊.” Sharna responded with,” I definitely do my love.”

The reasons Sharna gave for her departure seemed rather vague, so maybe she’ll come up with a surprise yet, for DWTS fans. In part, her announcement read, “I can whole heartedly tell you is that It’s all good, ALL love and in this moment I can’t help but be grateful for the time and the journey that I’ve had, the people I’ve met, the incredible talent I’ve shared the stage with and the memories I’ve made.” Plus, she still celebrated the win with Bobby Bones in the last season.

Speculation and theories on why Sharna left the show

DWTS fans actually draw some correlation between Bobby Bones and Sharna’s departure. After all, the controversial win came from the audience. Certainly, the judges held a different view on who should have won. As @nickycee29 noted in reply to another comment, “funny how your man wasn’t asked back or turned it down if you wanna say that. #producerswantnodramain28 that’s for sure.” But so far, Sharna Burgess fans might be missing the mark.

Sharna’s departure could merely be a financial decision taken by ABC. E! News claimed that Sharna’s exit could be temporary. They reported, “Burgess’ exit, which could just be for the season, was due to the budget of the aging series. DWTS previously took a cycle off to recalibrate after sinking ratings and is returning with some changes, including ditching the dance troupe and many extras previously associated with the reality series.”

♥️ As I’m sure you’ve heard, I will not be returning to @dancingabc this season. I am unbelievably sad to not be back!!! However, what i can whole heartedly tell you is that It’s all good, ALL love and in this moment I can’t help but be grateful for the time and the journey that I’ve had, the people I’ve met, the incredible talent I’ve shared the stage with and the memories I’ve made. To say the least.. it’s been epic. ♥️ and to have finally won still feels as exciting and special as it did the moment @tombergeron said our names. . After nearly 9 years I feel like I grew up on the show. I am going to truly miss creating, story telling and performing for you all, I’ll miss giving the transformative power of dance to the person in front of me, and I’ll miss seeing my Dwts family every day and watching them work their craft in ways that inspire me. Though nothing could ever replace my love for the show, there are things coming into my world that I’m excited to dive into now that I have time. Everything happens for a reason ♥️ you know me.. I’ll share when I can. I have endless love and gratitude for all of you and for everyone at the show. For my fellow pros you light up the stage time and time again, you are what makes the show magical and I can’t wait to watch you shine. ✨ And to all 12 of my partners… thank you thank you and I adore you. I’ll be watching and cheering this coming season for all of my fam out on that dance floor!!! Good luck everyone, may this be the best season yet! Let’s go season 28!!! 💋 #dwts

Sharna’s excited about her future

From her post, it’s clear that Sharna’s excited about her future. She wrote, “there are things coming into my world that I’m excited to dive into now that I have time.” However, the sadness creeps in as well. She’s been with the show a long time after all. But, maybe the revamped version simply means they can’t afford her. As Pure Dancing With the Stars notes, she had a much higher pay scale than other women. The website noted, “When the new crew of bigwigs (Llinares & Co.) took over, I’m sure they were told to find ways to cut costs – and I daresay it’s cheaper to let go of some pros that are costing too much and bring on newbies that you can afford to pay at a much lower rate.”

What do you think about the theory they simply cut costs and out went Sharna Burgess? Do you hope we’ll see her return in another season? Or, do you think the controversial win with Bobby Bones had something to do with her leaving the show? Sound off your thoughts in the comment below.

Chris Harrison Threatens ABC For Larger Payout
Now That ‘Younger’ Is Over, What Is Status Of Hilary Duff’s Spinoff?
Is Jo Shannon Ignoring Mama June On Social Media?
Mike Youngquist’s Uncle Beau Gets Brutally Honest, Natalie Is A Slob
‘Bachelorette’ Fans Wonder What The Heck A ‘Skin Salesman’ Does