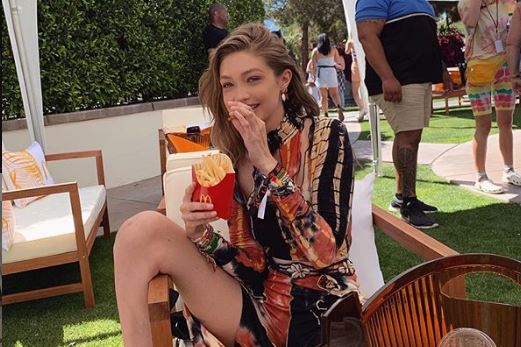 Monday might be the biggest night in Bachelor Nation history since Colton Underwood jumped the fence.

All of the entertainment and fashion/women’s lifestyle magazines, including Elle, Cosmopolitan, US Weekly and Refinery 29 are writing about the mysterious empty seat between the Hadid sisters at the MTV Video Music Awards which are taking place this Monday.

It’s unclear who this seat is for, but considering Gigi Hadid and Tyler Cameron have been dating for the past three weeks, it seems like there’s a good chance it could be him. Plus, they’ll potentially be making a red carpet appearance.

If Gigi Hadid does bring Cameron to the VMAs, it would be the couple’s official debut since they started dating in early August after following each other on Instagram.

So I met a legend yesterday named @itsdougthepug ❤️ Love what Doug is doing for the kids! Can’t wait to team up on an @abcfoodtours in Nashville

A source told US  that Gigi, meanwhile, is “doing a lot better” after her split from Zayn Malik in January now that she’s with Cameron. When Gigi was dating Zayn Malik, most of the shots taken of them were of their street style while they walked around, but she did bring him to public events like Fashion Week and the 2016 Met Gala.

A VMAs appearance would open the door to a whole bunch of possibilities, like an interview about what is going on in their relationship and their first official pictures together on the red carpet. They seem to be having a lot of fun together.

The seating chart also gives a look at the star-studded first row, which includes Taylor Swift and Cardi B seated next to each other, as well as budding couple Shawn Mendes and Camila Cabello sitting side by side, all in the first row. (The Hadid sister’s seats are in the third row) This couple will make their award show debut at the VMAs. They are set to perform “Señorita.”

Hosted by Sebastian Maniscalco, the 2019 MTV Video Music Awards air on MTV Monday, August 26, at 8 p.m. ET. One thing we all know is that Jed Wyatt is going to be very envious of Tyler if he attends the VMAs. Maybe he can get him a few of his demo tapes to pass along at the VMAs.