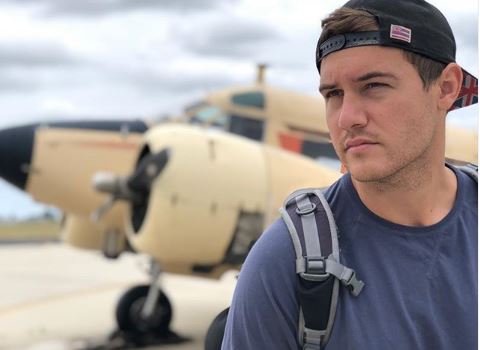 E! News is reporting that Pilot Pete, the second runner up in the last season of The Bachelorette will most likely fill the role as the next Bachelor.

Pilot Pete looks like he will get the job

As one insider explains,

“Pete was always the first pick but producers wanted to see how Paradise went with Mike. They love him but aren’t sure if he is ready to carry a whole show.”

“It could always change,” the source adds, “but Pete’s been their pick since Hannah’s season ended and Tyler began dating Gigi Hadid.”

Tyler’s post-Bachelorette dating endeavors actually helped boost Pete’s case. Initially, Tyler was sitting in the driver’s seat for the role of Bachelor.  But he decided to take Gigi Hadid for a spin and pursue other ventures outside the Bachelor franchise, pretty much eliminating himself.

Despite the #DerekforBachelor campaign, sources say it’s a “long shot” Derek will be selected for the role.

A production crew was recently spotted in Peter’s West Lake Village neighborhood in Southern California. But before everyone jumps to any conclusions, it’s important to note that The Bachelor often does test shoots before finalizing and announcing their choice.

Former Bachelor Colton Underwood Weighs In on His Replacement

“I think I even saw the other day, Mike hasn’t even had discussions with producers about being the Bachelor. So I don’t know. At this point, I’m sure Peter’s probably already met with them.”

He told AOL that if he was a betting man, he’d bet Peter.

So What Makes Peter So Special?

The qualities Pilot Peter possess that make him the obvious choice include his age, he has a career and has a great backstory. He has come from a very warm and loving family who will be well-liked on the show. Peter has acquired one million Instagram followers since appearing on The Bachelorette. There’s no doubt he can carry the show and that the female contestants and viewers will love him.

Peter has been in the conversation ever since his heartbreaking goodbye with Hannah. He only gained more momentum after the season finale, during which Hannah revealed that they did it in the windmill four times during the fantasy date.

ABC and Warner Bros. do not comment on casting speculation. The upcoming season officially starts filming in early September. The next Bachelor will officially be announced when Bachelor in Paradise ends.

Are you excited that Peter seems to be the lucky guy who will get to embark on the journey of a lifetime?