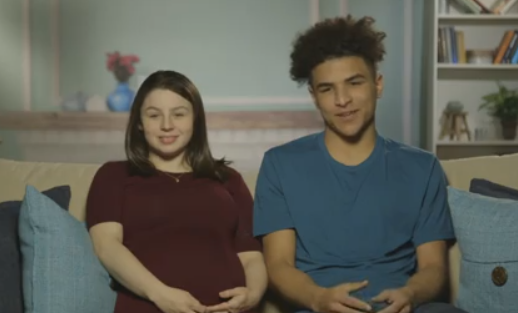 Recently, an exclusive clip from TLC’s Unexpected was released. The clip features a scene from the upcoming episode that will air on Sunday. This will be the fourth episode in Season 3.

In the clip, fans get a sneak peek of Tyra Boisseau as she is trying to get the baby’s delivery underway. The teen mom-to-be is trying all of the traditional methods of speeding up her labor.

In the clip, we see the Unexpected star bouncing on an exercise ball and walking around the house. She’s desperate to get her baby out soon. She seems like she is willing to do anything to help her labor progress.

Tyra describes what she has tried and says, “I know I walked up and down the steps, I was bouncing on a ball, I was doing TV yoga, I was dancing, I was doing everything to try to get her out. But like nothing happened.” Even after all of that, she was only two centimeters dilated.

Luckily, Tyra has plenty of support from her loved ones. Her mom, grandmother, and uncle are all there to help. Plus, her sister, who recently became a teen mom as well, is there for her.

In the clip, Tyra asks, “You can’t get un-dilated can you?” When her family laughed at her question, she responded and said, “I’m just asking. Y’all think I’ve been pregnant before.” Then, she added, “I didn’t want to go through all that pain and then it just go away for nothing. I mean all that pain for 2 centimeters and you gotta get ten like I still got eight more to go.”

In the clip, Tyra’s mother talks about Tyra’s labor progress so far. She says, “Tyra’s wore herself bouncing on balls, walking and doing just about anything she could do to get the baby out.” Then, she adds, “and her body is not cooperating.”

Later in the clip, Tyra is in the bathroom. She calls for help and her sister comes running in. It turns out that Tyra is bleeding pretty badly.

In the clip, we don’t get any answers about why Tyra was bleeding or what the result of the whole situation is. Fans are hoping that everything works out okay and that she and the baby are okay.

The upcoming episode of Unexpected airs Sunday at 10 p.m. ET on TLC. Be sure to watch it to find out the details of Tyra’s labor and birth.