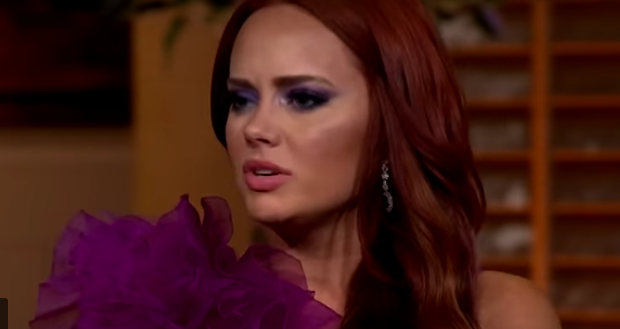 During the Southern Charm reunion, Kathryn Dennis’s sobriety got called into question. In a clip, fans saw Kathryn Dennis get defensive against Austen and said, “don’t think for a second you’re going to come after my sobriety. You better back up.”

Also in the clip, you see Naomi say, “somebody there saw you drinking.” Kathryn Dennis denies it and says it’s crap. Now Dennis according to People said she did eventually say she had started drinking again.

Is Kathryn Dennis Drinking Again And Did She Admit It?

Due to the strict rules, she has to follow after her custody battle with her ex Thomas Ravenel, Kathryn has to watch what she does. That might be why she wasn’t quick to admit she had been drinking.

After Andy pushed her, she nodded and said, “I don’t smoke weed, nothing illegal.” She said, “it’s not like I’m drinking and partying by any means.”

The whole conversation came up because they were talking about a Watch What Happens Live where Kathryn Dennis seemed out of it. Fans had stated she was slurring her words.

Craig spoke up and said, “You looked uncomfortable or a little spaced out or something.” Cameran Eubanks said, “It was very uncomfortable to watch. She looked like something was the matter.” Even rehab didn’t stop her from drinking some according to Page Six.

Austen had actually tweeted into the show and said something about what they were talking about. He said that was an absolute fabrication. He said that Madison had lied to him and begged the guy not to tell him. When Andy says Austen tweeted in and Kathryn yelled, “who?” Then after he was reading the tweet Kathyrn was like, “time’s up.”

When he was rehashing this on the reunion Kathryn Dennis acts confused and then says what are you talking about. He’s like I am saying you were acting inappropriately. Dennis says, “that’s because I find you boring, I don’t know.”

She argues with him until he gets frustrated. Austen says, “it doesn’t seem like you remember even being there.” That’s when the clip from the sneak peek where she yells at him happens. The fact that she’s drinking a little doesn’t go against her agreement with Thomas for joint custody of their kids. The whole reunion is tense for everyone but Kathryn Dennis gets hit the hardest on her sobriety.