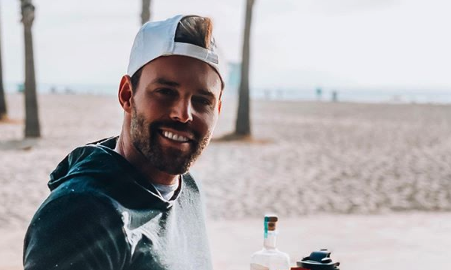 Bachelorette alumni, Robby Hayes, is speaking out against Todd Chrisley. Todd accused Robby of making an inappropriate tape with his daughter, Lindsie Chrisley. Now, Robby is explaining what happened.

Todd Chrisley accused Robby Hayes of some pretty big things. Apparently, he thinks that Robby made an inappropriate tape with Todd’s oldest daughter, Lindsie. Robby is not amused by these accusations and according to US Weekly, he’s defending himself.

On the “Housewives and Vanderpump” podcast, Robby says that the tape was never created however, their actions were recorded.

“We did not make a sex tape,” Robby said. “I’m not sitting there with a camera aimed down and trying to get the angles. Like, we got caught on the security camera, basically. It was a puppy camera in her friend’s living room, the couch we crashed on.”

That’s certainly an awkward way to get caught. Better check for cameras next time!

What’s even worse though? Lindsie is actually married and her family has supposedly fought to keep all of this from going public. Of course, that didn’t happen.

“It’s heartbreaking and shameful that these kinds of accusations have to be aired in public. We have tried to keep Lindsie’s extramarital relationships with Robby Hayes and Josh Murray private for her sake since August of 2016,” Todd said.

After Robby heard about the tape accusations, he stepped right up to clear the air for himself and basically tell Todd he has better things to worry about than their daughter.

“I know Todd and his family are going through some tough times right now and I pray everything works out in their favor. They should probably focus on how not to be imprisoned for 30 years rather than spreading gossip to try and hurt their daughter. I truly believe they are good people and I wish them the best in however they choose to go about their actions,” Robby said.

So what was Todd talking about when he mentioned prison? This is all happening while the Chrisley family faces tax evasion drama. Both Todd and his wife were sent to jail. However, no surprise here, they each paid $100,000 to leave jail. Apparently, they both looked fabulous leaving jail. Their lawyer says that the family isn’t guilty, so it’s just a matter of them continuing to battle the accusations.

What do you think of the Bachelorette star and Chrisley star’s accusations? Let us know if you believe Robby in the comments.

Be sure to watch Bachelor in Paradise every Monday and Tuesday to see even more drama unfold.

‘Bold And The Beautiful’ Joe LoCicero Is Back As Vinny Walker But How?
‘Yellowstone’ Season 4: Why Wasn’t It On Tonight?
Emma And Alex Make A Dating Profile For Their ‘Bossy’ Sister Anna
WHAT? Farrah Abraham’s SHOCKING Puberty Talk With Daughter Sophia
Emmy Medders Hikes Knee & Flashes Pearly White Smile