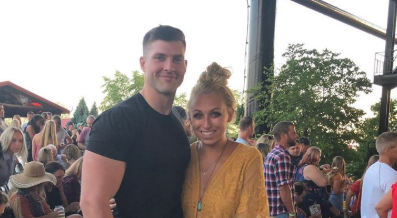 No one worry! Kevin Fortenberry has finally found love. After competing on Hannah’s season of The Bachelorette and Bachelor in Paradise, it was looking bleak. But, he has revealed he finally found someone to love and the way that they met is pretty cute.

Kevin Fortenberry has finally found love after competing for two seasons for the love of a woman. According to Accept this Rose, her name is Hillary Webb. Since Kevin was sent home this week on Paradise, Hillary was finally able to show off her new boyfriend. She took advantage of the opportunity and posted a photo of them on Instagram.

Hillary made an adorable caption in honor of the end of Kevin’s time in Paradise.

“•You’re my paradise, I love you•” she wrote on her post.

The two look absolutely adorable in the photo as they stand together at a concert. Fans seem to agree in the comments raving about how cute the couple is and wondering how they met.

“omg I’m actually crying!! Kevin was my favorite contestant from the start on the last season of the Bachelorette because he has such a kind heart and reminds me so much of my own boyfriend it’s kind of scary 😂 Couldn’t be happier for you two! Lovely couple ❤️” one user wrote on the post.

It looks like this post got Hillary a lot of attention. The post got over 400 likes when past posts didn’t even get 100. No surprise there, everyone loves Kevin, how could they not!?

How did the happy couple meet?

The way the two met is honestly pretty cute. Apparently, they met at Target of all places and then followed each other on social media. Now, they are in love. How adorable is that? That’s living the dream for basically any girl ever.

The romance blossomed as soon as Kevin returned home back in June when he actually got booted from Paradise. He deserves it so much. He has a great personality and was always full of life on the show. It’s so exciting that he can finally find someone that appreciates him for who he is, instead of being made to feel like he isn’t worthy. Paradise doesn’t always work, but sometimes when it doesn’t it’s for the best!

Are you excited for Kevin or sad he isn’t still on Bachelor in Paradise? Let us know your thoughts in the comments.

Be sure to watch new episodes every Monday and Tuesday night to watch all the drama unfold!