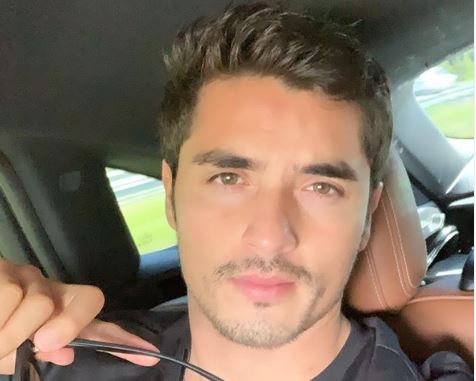 Everyone has a different type they are attracted to and that’s what makes the world go round. It prevents everyone from fighting over the same few people (although that still happens much more frequently than it should, uhm, here’s looking at you Blake) Anyway, most people never gave Bachelor in Paradise star Christian Estrada, 29, a single glance or thought. He briefly appeared on Becca Kufrin’s season of The Bachelorette. But he’s a model that apparently many females are wildly attracted to.

After being booted off of BIP during Monday’s episode, Christian is once again making headlines. This time it’s for a much different reason. Back in May, PEOPLE en Español reported that his ex-girlfriend, Frida Sofia, had accused Christian of sleeping with her mother, Mexican rock star Alejandra Guzman.

Christian reportedly met Alejandra through his brothers, who work as the stylists for the singer. Sofia is accusing Estrada of being a ‘fame-seeker’ for staying close with her mother after their break-up so he could remain in the spotlight.

The Mexican model and actor denied Sofía’s allegations on Un Nuevo Día (Telemundo), saying he respects Guzmán “like his own mother” and insisting there was no romance between them.

Both Guzmán and Sofía are part of the famous Mexican “Pinal dynasty,” which traces its lineage to the iconic actress Silvia Pinal. Sofía is also famously known for posing in Playboy Mexico in 2015.

The Latin Blood In Him Not Only Makes Him Woo The Ladies, But Fight Anyone Who Gets In His Way

Christian and Jordan got booted off BIP while vying for the heart of Nicole Lopez-Alvar. Hot-headed Jordan tried to destroy the piñata Christian had set up for Nicole because his buddy, Clay, was also wooing her. The situation quickly escalated, and, at one point, Christian had to be tackled to the ground by several crew members.

After the two guys got into a physical altercation, they were both sent home by producers and Chris Harrison. given the show’s zero-tolerance policy toward violence. (But If Jordan can’t be the next Bachelor, then please bring him back as a bartender, preferably along with Demi)

Other Contestants on the Beach React to the Fight

Several Bachelor in Paradise stars exclusively spoke to E! News at the iHeartRadio’s Real Street Festival about how they felt in that moment of the intense brawl between Christian and Jordan.

“I thought the fight was fake at first. I thought it was like staged—oh, this is kind of funny,”  Tayshia said. “But it was so intense and so scary. Watching it unfold is mind blowing. Honestly, we were standing at the bar and then I hear screaming and I was taken completely by surprise. Somebody was falling down the stairs. The next person was running after the other. And then I see security.”

Wills weighed in and described the fight as being “surreal.” “It definitely seemed surreal… and it was a bit frightening. A lot of the girls on the beach were terrified and it kind of threw everyone for a loop and gave everyone an adrenaline rush. It was just wild to see.”

“I think that Jordan and Christian, their ego probably got the best of them,” said Mike Johnson. “And I was watching. I was standing beside the biggest guy there, Clay. And I was sitting back sipping on my tequila, and I had a good time watching. I didn’t want to interrupt the two of them, they’re fighting. I wanted to make sure that they got out what they needed to get out. And I know that the Bachelor producers would make sure that we [were] safe and good to go.”

Mike continued, “That was the first time I had ever seen anything remotely close to that, but that s—t was wild to be quite honest.”

All three contestants were in agreement that the producers were correct in adhering to the given the show’s zero-tolerance policy toward violence and made the right call in sending both men home.

Even Jordan commented on the brawl, saying, “I’ve been wrestling alligators since the age of 3.”

Where Does He Go From Here….& Is Paradise In His Future?

While he didn’t get the chance to find love in Paradise, Christian certainly gets around. He was recently linked to 90 Day Fiancé star Ashley Martson. Ay dios mio!

The aftermath of Christian and Jordan’s blowout will air on Bachelor in Paradise’s upcoming episode on ABC Monday, August 19, at 8 p.m. ET.

If anything, he’s consistent. #BachelorInParadise (@people)