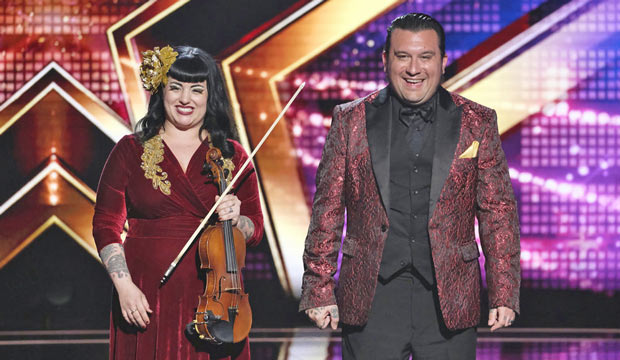 Another day, another harsh criticism on a performance by America’s Got Talent judge Simon Cowell.

Nick and Lindsay Williams took the stage on Tuesday night during the live quarter finals. They hoped to wow the audience and judges with their opera-violin-knife-throwing act.

Unfortunately, their rendition of Johnny Cash’s “Ring of Fire” crashed and burned. Both Simon Cowell and Howie Mandel hit their red X buttons. Viewers clenched their teeth and gasped in horror.

Unfortunately for the dangerous duo, Simon wasn’t alone in disliking the performance. Some of the judges, however, thought it was so bad it was funny.

Simon Cowell: “Can I be honest with you? What she was doing with the knives trying to kill you was what I was thinking when I heard you sing. I mean, I’m not being rude, but I think in the history of ‘America’s Got Talent’ that was the worst live performance I’ve ever seen. I love you two, but everything went wrong. I mean, it was like watching a murder. Every knife fell out.”

Gabrielle Union: “I loved when you cleaned your toes. The toe-cleaning on the world’s biggest stage? That’s a bold choice.”

Julianne Hough: “It was so bad that it actually ended up becoming so good. It was comedy! You turned it around and it became a comedic act.”

Howie Mandel: “I think you went down in a ring of fire. Nothing happened but I kinda — it’s funny. America will tell you, I promise you.”

As Yahoo Entertainment News confirms, Lindsay had a hard time with the knives. She nearly caught her husband on fire.

Most of the knives didn’t stick. The violin and Nick were off rhythm. The song was also a poor choice as it didn’t mesh with Nick’s singing style.

The Viewers at Home Agreed with Simon Cowell

While Cowell is known for being harsh and critical, that doesn’t always mean he’s wrong.

In fact, the viewers at home that have taken to social media agreed with him. They thought the performance was horrible. They thought it was bad and hard to watch. The jokes and reaction posts quickly poured in.

That was a gothic dumpster fire. #AGT

Simon was right, that was the worst live performance. Ever. #AGT

Whether the bad performance sends Nick and Lindsay Williams home or to the next round is a matter for America to decide. Based on his comments, Howie seemed to think America would agree with him and Simon.

Have you had a chance to watch what is being coined as the worst Live AGT performance in history? Do you think Simon Cowell’s comments were too harsh? Share your thoughts with us!