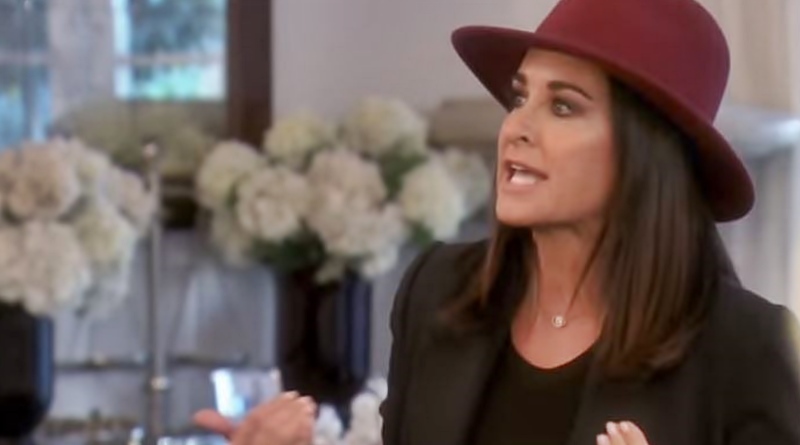 RHOBH fans know that Kyle Richards and Lisa Vanderpump fell out in season 9 of the Bravo show. It looked as though their fractured friendship fell apart forever. That came when Kyle confronted her for “lying” about leaking the Puppygate scandal to the media. Terribly hurt, Lisa got hammered by most of the cast over the allegations and she finally moved on. However, Kyle surprisingly believes their friendship might be fixable, rumors say.

News that Kyle Believes she and Lisa can repair their broken friendship arise via Hollywood Life. We noted though, that Kyle never actually said it herself, and news comes via source. Therefore, for the time being, it’s still a rumor, and nothing more. In fact, on their social media, certainly on Twitter, Lisa sounds anything but overly forgiving.

One fan, @chicanogayrants posted up on Twitter on August 16. They said, “I’m not sure if you ever rewatched #RHOBH @LisaVanderpump, but Kyle has had it in for you since the beginning. It seems like she has tried to create a storyline about you being dishonest from the start. Did you ever notice that?” Lisa replied, saying, “Yep, I know that now.”

Yep, I know that now.

The sort of comments we see from RHOBH alum, Lisa, seems jarringly different from the Hollywood Life article. They wrote about their source. Allegedly, “Kyle feels the time has healed some of the problems and pain for [Lisa]” Plus, typical of Kyle, it’s more Lisa’s fault than hers. Actually, the source says, “She just thinks Lisa blew this so far out of proportion.”

The story goes on, noting, “at the end of the day, she really does wish her well. Deep down, Kyle still has confidence she and Lisa can be friends again and that she’d even return to the show.” Well, not too many Team Lisa fans will buy that. But for Kyle, the source adds that she’s “really happy to be doing it, with or without Lisa.” The article also goes on to suggest that Lisa mourns her broken friendship almost as much as the death of her brother Mark, and her mom.

Lisa moves on with new projects, tries to find peace of mind

From her own social media, it becomes clear that Lisa’s focusing more on surrounding herself with family and special friends. Plus, she’s got new projects on the go. So much so, that it’s anticipated she’ll take a bit of a step back in the upcoming season of Vanderpump Rules. Perhaps right now, Kyle’s friendship’s just not sitting at the top her priority list. Certainly, it looks the RHOBH alum isn’t entertaining thoughts of a return to the Real Housewives of Beverly Hills TV show.

What do you think about the rumor that Kyle Richards believes her and Lisa Vanderpump’s fractured friendship’s fixable? Sound off your thoughts in the comment below.