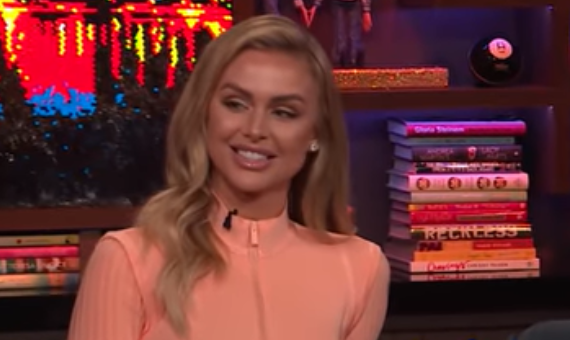 Lala Kent has been having the best time spending days with her fiance’s children. Lala and Randall do everything together and after taking him off her social media to keep his life private, she’s doubled down. Now, she not only is sharing her bliss with him, but his children have found their way onto her Instagram story. One person who is not pleased about this is their mother Ambyr Childers. Ambyr and Randall share two children.

They have two daughters according to People, London and Rylee who are 9 and 5. The two divorced in 2017. According to All About RH the clips on Lala Kent’s Instagram are of her day to day. The ones with the girls are hanging out by the pool. Another shows them playing with makeup and another shows one of the girls drew a picture of her sister, Randall, and Lala.

An additional snap features the girls with Lala and her trainer Jenna Willis as she gets her body ready for the wedding. One of the girls is dressed in a sports bra and shorts. Lala captioned it, “my squad. While the nanny is away, we still get things done.”

My truest form. No cakeup, no clip-ins, sneakers, and earrings to make me look like I’ve got my shit together.

What Did Ambyr Childers Say To Lala Kent About The Pictures Of Her Children?

The Netflix star had apparently been texting Lala to tell her to take the pictures down, but she wasn’t getting a response. She then decided to address it on Instagram saying,“Since you don’t want to answer my text messages, I’ll try here. Lala, I appreciate your love towards my children. Until you’re officially their stepmother please refrain from posting my children on social media! I hope you understand where I’m coming from. Many thanks.”

At the time of writing this there’s still a video on Lala Kent’s social of the kids talking about the air conditioning guy. Neither Lala or Randall have commented on the public message from Ambyr.

Does The Vanderpump Rules Reality Star Already Consider Herself Their Stepmom?

Lala Kent has previously called herself a stepmom according to E News. She said she thinks it’s fun. About the girls she said, “I get that role of, like, you can feel safe with me but we can also have the best time ever because I’m not your parent. She said Randall and the mom do such a great job raising them so she lets them handle it. Lala says, “I’m the one who’s like, here, have some lip gloss. You want to do fake nails? We can do fake nails.”

Hopefully Lala will respect Ambyr’s wishes since she is the one who has a say in whether they should be on social media. It remains to be seen if she’ll refrain from posting with them in the future.