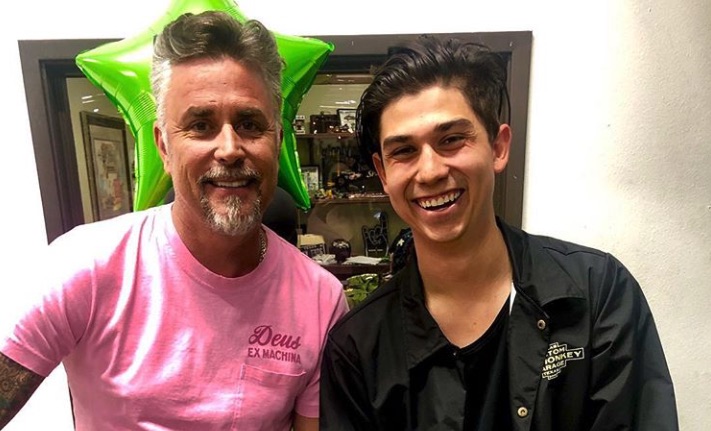 Fast N’ Loud fans may not know everything there is to know about Richard Rawlings. Richard did just get engaged to Katerina Deason on Saturday, but fans may not have know that he has a stepson named Sinjin Venegas until he revealed in a recent Season 15 episode. Most of all, he works at Gas Monkey. What do we know about Richard’s stepson Sinjin?

Congrats, Richard! 💍🍾 🎉 Wishing y’all all the happiness in the world. Posted @withrepost • @rrrawlings The very second I laid eyes on you I knew….. Then only seconds later I realized your unbelievable beauty and grace came from within….. Right then I decided I wanted to spend all my seconds with you… Katerina you are my everything and I promise to make the rest of our lives full of love and laughter. … You truly are my best friend and soulmate….. May God guide us through the rest of our lives as ONE….. I love you with all that I am. R

Fast N’ Loud star Richard Rawlings revealed to the Discovery show audience that he has given his stepson Sinjin Venegas a job at Gas Monkey. “His mom said give him a job. I gave him a job.”

Richard did not identify Sinjin’s mom by name, but she is Suzanne, Richard’s now ex-wife. The couple divorced back in May. They may not have made the decision to part at the time the show was filmed, but now they are officially split. In fact, Richard Rawlings has moved on and has proposed to Katerina Deason. She said “yes!” There is no word if she has any children that could end up working alongside Sinjin.

Sinjin was only three when Richard and Suzanne got together. Sinjin’s unusual name was taken from professional volleyball player Sinjin Smith. It should be noted that Sinjin Smith’s real name is actually Christopher St. John Smith. But as Sinjin Smith was one of the greatest beach volleyball players ever, he clearly needed a nickname, and Sinjin became it.

Richard’s Sinjin is a 20-something millennial who probably had classmates with equally unique names. He graduated from the University of Arkansas in 2017 and is now doing photography and social media for Gas Monkey. He seems to be an upbeat kid that gets along great with Richard. Richard doesn’t have any biological children, so he may want Sinjin to learn a few tricks to pass along his business.

I was called the Karate Kid the entire day because of my headband.

In a recent episode of Fast N’ Loud Season 15, the cameras were shooting as paint specialist Mike Coy told the audience he didn’t know Richard Rawlings had a stepson. According to Distractify, Coy said. “I’ve been here for like five years and this is the first I’ve ever heard of Richard Rawlings having a stepson.”

That may explain why Richard’s crew didn’t know about his stepson on Sinjin’s first day. Richard even forgot about it and Sinjin even teased him a bit and asked how he could forget about him. Richard, being Richard, explained that it is always about him as he retorted, “Cause I don’t really pay attention to you very often… Sinjin, my boy, I love ya, but the world don’t revolve around you. It revolves around me.”

Fast N’ Loud fans were you surprised to see that Richard has a stepson? Are you glad that someone younger is on the show now? Be sure to come back to TV Shows Ace for the latest on Richard Rawlings and Gas Monkey. Fast N’ Loud is on Monday nights on Discovery.