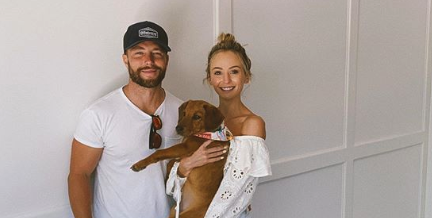 It’s been a while since Lauren Bushnell was on The Bachelor, and she’s got a whole new life for herself. Now, she’s sharing updates on Instagram. Honestly, the updates are pretty adorable.

‘The Bachelor’ alum buys a house

Lauren Bushnell kind of tricked fans in her latest Instagram post. First, she revealed that she actually adopted the puppy she has been fostering. His name is Cooper and he’s absolutely adorable. She noted that now she’s going to have to start trying to find him a brother or sister.

“So happy we get to love you Coop- now that we have adopted you I’ll start working on your dad and finding you a brother/sister, but for now it’s the 3 of us!” She wrote on the post.

Then, she really dove into the details. Turns out she and Chris Lane, her fiance, actually bought a house! That’s a lot of life changed in just one Instagram post.

The photo was a shot of the two of them standing outside holding their new furry family member.

“Oh! And!! WE BOUGHT A HOUSE! 🏡” Lauren added to the end of the post about Cooper.

It’s without shock to anyone who knows me well but, we have decided to make Cooper a permanent part of our family 🐶 so happy we get to love you Coop- now that we have adopted you I’ll start working on your dad and finding you a brother/sister, but for now it’s the 3 of us! Oh! And!! WE BOUGHT A HOUSE! 🏡

And then there were three

In the comment section, everyone seems so happy for the couple. Not surprisingly, most of the comments are about them adopting Cooper, not buying the house. But, who can blame them? Rescuing animals is adorable!

Although, some fans are a bit concerned. They used to have a Corgi, but now they are saying their family is just the three of them. Does that mean they got rid of their other dog?

However, it’s still an exciting time for Lauren and Chris regardless of what happened in the past. What’s better than adding a furry friend to the family? Turns out, also buying a house! They are basically the dream family at this point. Now, it’s just a matter of time until the wedding and they finally add some human babies to the family!

Are you excited for Lauren or did you want her to end up with her Bachelor fiance, Ben Higgins? Let us know your thoughts in the comments.

Be sure to watch new episodes of Bachelor in Paradise every Monday and Tuesday night. The drama is heating up as all the Bachelor alum try to find someone to love!

Which ‘RHOC’ Alum Could Return As ‘Friend’ Of The Housewives?
‘LPBW’ Will Zach & Tori Move To Roloff Farms For Jackson And Lilah?
WOAH! Tori Roloff Fires Up ‘LPBW’ Fans: Is She Mad At Amy?!
‘All American’ Season 4 Premiere Date Set, Spin-Off Held for Midseason
‘Luca’ Post-Credits Scene Explained: What The Heck Happened?!