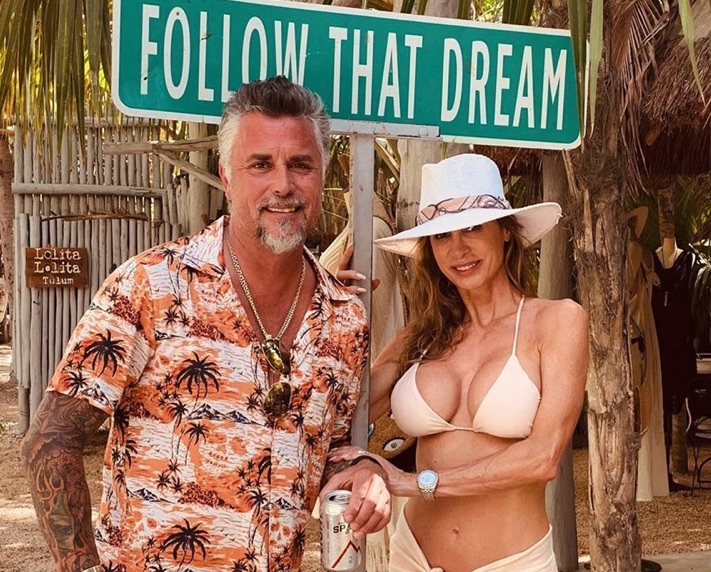 On Saturday, Fast N’ Loud star Richard Rawlings proposed to his girlfriend Katerina Deason and she said yes! What do we know about Katerina Deason, the Gas Monkey owner’s beautiful fiancée?

We know that Kat, as she is nicknamed by Richard’s sister, Daphne, is also called Katerina Panos or Katerina Panos Deason. According to My Life, she is 51 years old, born on November 5, 1967. This makes her 18 months older than Richard–but who is counting the months? She is a stunner! She is incredibly fit and looks significantly younger than her birth year. Like Jennifer Aniston and Sandra Bullock, she is a good example of how 50 is not the same as it was back during mom’s era.

Richard’s fiancée Katerina Panos Deason was previously married to Texas billionaire Darwin Deason. They tied the knot back in 2008. Katerina was Deason’s fifth wife, he was 27 years older. Deason made his money by selling his company ACS (Affiliated Computer Services) to Xerox for US$ 6.4 billion. Needless to say, Katerina lived an oppulent life of the rich and famous.

The couple lived quite a luxurious lifestyle. Super Yacht Fan reported that they lived in a 18,000 square foot Dallas penthouse that consisted of the top two floors of a large building. They also resided in a sizable abode in Palm Desert, California, conveniently close to a golf course.

According to Instagram poster @theredcynthia, who is journalist Cynthia Rutt, the couple have not yet officially divorced. Mrs. Lucia Power commented that Kat was married to Darwin Deason. Rutt corrected her by stating, “‘Was married?’ Try IS.” Rutt continued, “@mrsluciapower She traded a billionaire for a guy worth $20-million. I say “you do you,” but at least get the paperwork done before you put on someone else’s ring.”

So, we should really state, Katerina is married to Darwin Deason and is engaged to Richard Rawlings. Second, we can assume she likes guys whose first and last name start with the same letter. Alliteration in names is attractive and has a superhero quality to it. Think Marilyn Monroe.

According to a 2012 Forbes feature, the couple lived on a yacht three to six months of the year. Not just any yacht. They lived on a 205-foot mega-yacht called the Apogee. Built in 2003, this luxurious boat boasts seven guest cabins and staffed with 17 crew and two security guards. Furthermore, the magazine shared that Deason would not reveal what the cost of his boat was. However, the publication made an educated guesstimate that it was worth $70 million dollars. The billionaire did share that he “probably” spends about $7 million a year running it.

To start out, Darwin Deason designed the boat based on a James Bond fantasy. The lounge is inspired by the Hôtel de Paris in Monte Carlo. The party boat, which can accommodate 16 guests, featured a 22-foot onyx-topped bar. The Apogee had all sorts of amenities that partygoers want to indulge in, including a Wurlitzer jukebox, karaoke machine, disco dance floor, disco balls and even dance pole! Tired after some disco dancing? There was a 12-person Jacuzzi to relieve achy muscles.

According to Boat International, you can now buy the Apogee for a mere $25 million. Any chance Richard Rawlings will decide to give up cars and take up yachting?

Richard is marrying a very athletic woman. A quick browse through Katerina’s Instagram page shows her doing complicated back flip off of the yacht, and riding a personal watercraft with one leg gracefully poised in the air.

What do friends have to say about Kat? Her friends have posted on social media their love for Kat. When Richard Rawlings and Katerina Deason announced their engagement on Instagram,  Courtney Hansen, star of History’s The Ride That Got Away car show, absolutely gushed on Instagram. “You did it!! So happy for you!!!! Katerina is amazing. Can’t wait to see the ring & give you big hugs!! ❤️❤️❤️”

Clearly, Richard’s sister Daphne adores her. For example, Daphne posted on social media,”Kat, our family is blessed to welcome an angel such as you!” I guess we can now call Katerina Richard’s amazing angel!

Fast N’ Loud fans, have you been catching up with the latest news about Richard Rawlings? Share your congratulations in the comments field and check back with TV Shows Ace for the latest on Richard Rawlings, Katerina Deason and the whole Gas Monkey team. Don’t forget to watch Fast N’ Loud Season 15 Monday nights on Discovery.