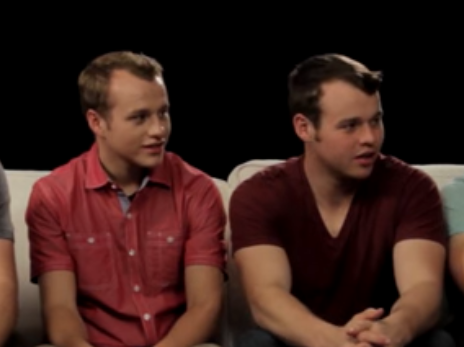 The Duggar kids keep growing up and recently two more have reached the age of twenty.  Jim Bob and Michelle have three girls that get the most attention. Jinger, Jessa, and Jana are the most popular kids according to The Cheatsheet.

Recently Jedidiah was spotted in a post with Michelle. Fans think there was a reason for this rare picture of Jedidiah. When he made an appearance on the Duggar family Instagram. Michelle Duggar posted, “Jed, thank you so much! Such a tender-hearted guy!”

“He sure is!” Joy Anna Duggar and Austin Forsyth said. Anna Duggar wrote, “Jed is always thinking of others — such a sweet guy!” All the family wanted to make sure they let the world know how sweet he is.

Jed, thank you so much!! He bought me this sign as a gift from the Tontitown Grape Festival. Such a tender-hearted guy!

Why Do Fans Think Jedidiah Duggar  Is Now Showing Up On Social Media?

Jedidiah and his twin, Jer have turned twenty now. They still live at home because they aren’t married. Most of the older Duggar kids have their own Instagram. The twins haven’t made one yet. Not only is Jedidiah Duggar in a picture with his mother on Instagram, but all of the family is also commenting on it. Fans immediately also commented that he was such a good guy and those who know the Duggars think this is a debut kind of post. A sign that their boy is courting. The Duggars do like to marry young so fans wouldn’t be surprised if he was courting already.

There was a rumor Jed dated Kendra Caldwell before Joseph did. Now they’re married and Jed appears to be single. The rumor was they never officially entered into a courtship, but he thought it was going that way. Duggar’s courtships go beyond dating, they only enter into them if they intend on moving into marriage.

Fans think the reason Jedidiah Duggar is being pushed by the social media at the moment is because he’s entered or will be entering into a courtship. They think he’s seeing a girl who told him to be thoughtful. Either way another courtship means happy fans eager to watch the show. Fans will be waiting to see if an announcement is made soon or if a new girl is noticed in Jedidiah’s life.

‘Outdaughtered’ Uncle Dale Gets The Best Father’s Day Gift Ever
True Reason Behind Amy & Matt Roloff’s Divorce: When & Why
Reality Steve Revealed Who ‘Bachelorette’ Katie Thurston Is Engaged To
‘Autopsy: The Last Hours of Frank Sinatra’ Where To See, What To Expect
Pastor Jeremy Vuolo Preaches Sermon To Brother-In-Law Josh Duggar