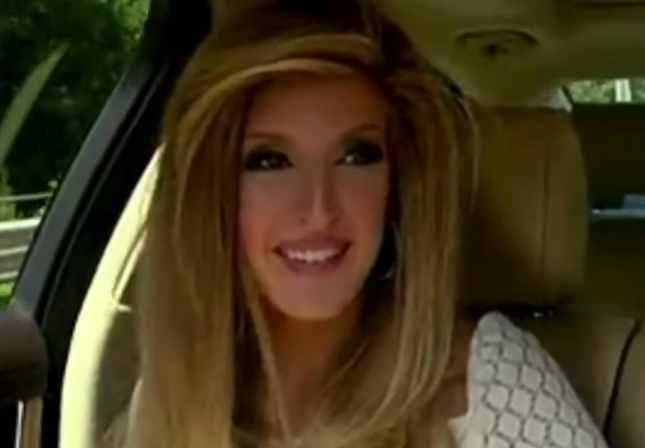 Lindsie Chrisley has been vocal in the news lately. In the middle of an inditement of her father and stepmother, she claims her father threatened her. In a police report, she stated both her father and her brother said they wanted her to lie about an incident. If she didn’t they would release a sex tape of her with two Bachelorette alumni.

According to People she doesn’t think reconciliation is in their future. Her attorney, Musa Ghanayem, said the two had not seen each other in quite a while. “Lindsie never had a sincere gesture from her father,” he said. “We don’t even know how to react if she was given a sincere opportunity to reunite.”

Lindsey Chrisley has gotten a response from her father. Todd Chrisley said, “As I’ve said all along, Lindsie is my daughter and I love her, and that’s not going to change.” However, behind the scenes, she maintains that’s not the case. He puts on a show for the public about how much he cares, but he’s never shown her he wants to reconcile.

In response to Lindsie’s claims that her brother bought a sex tape to extort her Chase Chrisley denies it. “I love my sister and I don’t understand why she’s doing this to our family. Not only am I heartbroken over these false allegations by my sister — and they are totally false — but so are my parents and the rest of our family.”

Lindsie’s lawyer continues to remain strong on the fact that Lindsie Chrisley is being harassed. He said, “Unfortunately, certain members of her family will not let her live in peace. We are flabbergasted at the audacity of Todd and Chase Chrisley.”

• There should be a weather app for people with social anxiety. Like, “Today Target will be partly crowdy with a 70% chance of people you know.” • 👱🏻‍♀️🚘😻 🌼 G I V E A W A Y 🌼 I’ve teamed up with an amazing group of lady bosses to gift one of you a shopping spree at @shoplagreenbuckhead [$200], @slateandtell [$250] & @leatherandvodka [$1630] & capture the fun with a Fujifilm Instax Camera & accessories to round it all up! 🛍👑💕 • Entering is easy👇🏼 1. Follow Everyone tagged in this photo✔️ 2. Tag 3 besties ✔️ 3. Comment your favorite way to treat yourself this spring ✔️ BONUS ENTRIES: 1. Like my last three posts 2. Share this post on your story • Winner is @jordynelyse —> prize must be claimed within 48 hours! This giveaway is in no way sponsored or promoted by Instagram. GOOD LUCK BABES ⭐️ 📷:@nataliecahophoto

This Is Far From Over For The Chrisley Family And Lindsie

Her lawyer also said Lindsie Chrisley has been open to a reconnection. He stated, “it’s always been her wish to reconcile on a genuine, loving, human level, not on a superficial business level, or a phony type of affection that has no depth of to it.”

The attorney said they will work with the investigators into the tax evasion claims. They will cooperate and Lindsie, “prays for a just outcome so she can go forward.” The Chrisley’s are due in court soon so the drama will continue until a decision is made.