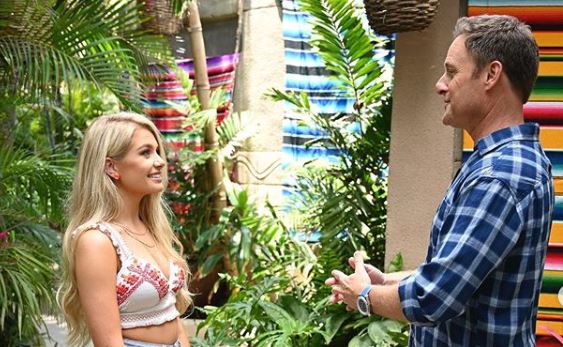 Blake’s love octagon is probably going to be overshadowed by the unexpected truth behind Demi Burnett’s coming out story. (Similarly to how Jed replaced Luke P as the worst on Hannah’s Season of The Bachelorette.)

Bachelor in Paradise has been hyping up how 24-year-old Demi and her real-life girlfriend Kristian Haggerty (who she’s been with prior to the show since February) will be a huge first for the franchise as the first same-sex couple. The franchise is really playing it up in the promotional footage and press. In media interviews, Chris Harrison has spoken out.

However, Soap Dirt landed an exclusive interview with Demi’s reported ex-girlfriend Tiyana Sky who claims she was Demi’s first girlfriend four years ago when Demi was 20-years-old. Which means Demi was aware of her bisexuality prior to appearing as a controversial contestant on Colton’s season. Demi’s mom being in jail wasn’t her biggest secret that she could have spilled to (then virgin) Colton. (She confessed to Colton that her mom was being released from federal prison after serving a sentence for embezzlement.) Now it’s someone from her intimate past who is stirring up trouble for her and the Bachelor franchise.

What did her ex say to Soap Dirt?

Demi Burnet’s ex explained that she was shocked when Demi joined The Bachelor. Just a few months before that she told her she was still in love with her. She even said that Demi tried to get her back while the show was airing. They never got back together.

When they started dating Tiyana was 16 and Demi Burnett was 20. They even talked about marriage, kids and being together forever. They broke up due to Demi cheating with an old friend.

However, Tiyana Sky specifically said Demi Burnett always told her she didn’t need to come out. Tiyana revealed to SD that Demi asked her to take photos of them off her social accounts before The Bachelor. July 19, 2018, was the casting call for the ABC show in Texas. Only two days later, Demi Burnett deactivated her Tumblr.

Responses to this exclusive information on Bachelor Obsession include:

Bachelor in Paradise has become quite controversial. Blake admitted to breaking his contract by flying to visit Hannah G a week before they headed separately to Mexico. Do you like how the franchise is trying so hard to be the first of its kind in reality television? Has reality become blurred and more stunted and produced? Has the show lost its main focus of couples finding love? Weigh in with your thoughts…

Don’t miss new episodes of Bachelor in Paradise on Monday and Tuesday on ABC.