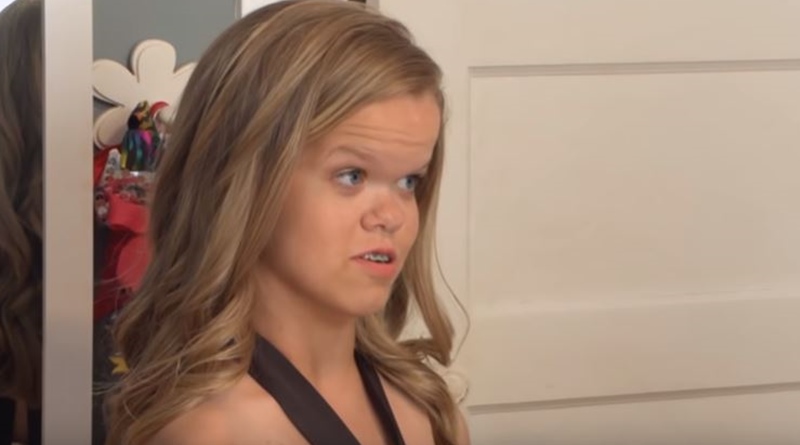 7 Little Johnstons fans saw Anna Marie act up a bit through the seasons of the show that debuted back in 2015.  But now, the parenting that some fans criticized as overly harsh seems to have paid off. That’s because Anna’s starting college where she plans studying for a career as a teacher.

7 Little Johnstons Anna grows up, a few stumbling blocks along the way

Anna Marie joined the family of Trent and Amber as one of three adopted children. Trent and Amber also produced two of their own biological kids, Jonah and Elizabeth. As fans of the TLC show know, all of the family suffer from Achondroplasia Dwarfism. Often, these conditions mean they end up requiring surgery from time to time. In fact, young Alex needed surgery on his brain in 2017. So, oftentimes, there’s a bit of stress and worry in the family.

Anna added her share of stress to her parents’ lives. As far back as 2017, we saw that Anna, even before her adoption got finalized, had her mind set on doing makeup and hair rather than studying at college. Next, we saw another stumbling block. It came when Anna took her driving lessons, but Trent and Amber felt they couldn’t trust her to behave responsibly.  In 2018, Trent and Amber celebrated their wedding anniversary at a B&B, with Anna looking after the 7 Little Johnstons kids. She did okay with that responsibility and things looked up. But then, she broke the rules on a family vacation by meeting with a boy in a hotel room.

Anna changes her career choice to college and becoming a teacher

In the last season of the show, Anna really matured a lot. In fact, she finally got permission to drive and we saw her preparing for her prom. Now, over on Instagram, Trent shared how proud they are of Anna. The young woman from the 7 Little Johnstons looks bright and excited as she and her mom crouch down next to her bed in her new digs.

Trent captioned his post with, “These two right here have been busy all summer planning for this day. This Momma has years of hard work and love in this young lady. Anna Marie, we cannot wait to watch you become a teacher! We love you gozillions!” Well, that’s an exciting and much better choice for her, and she looks happy with her decision.

These two right here have been been busy all summer planning for this day. This Momma has years of hard work and love in this young lady. Anna Marie, we cannot wait to watch you become a teacher! We love you gozillions! #annadidit @team7lj

Many fans reacted to the post with approval. Too often in the past, we saw a lot of criticism from some followers over how the parents sometimes seemed to treat Anna unfairly. But, as pointed out by Heavy, sometimes Anna showed a rebellious side that needed addressing. Well, most teens go through that period, and now fans of 7 Little Johnstons are clearly happy about the teacher ambitions. @esperanzamagallanesq posted, “Good luck in college!!!!! Last leg [of] your schooling! God bless😘😘😘😘.”

What do you think about Anna growing up and selecting a career in teaching? Do you hope to see her actually taking her first classes one day? Sound off your thoughts in the comments below.

Remember to check back with Tv Shows Ace often for more news about 7 Little Johnstons.