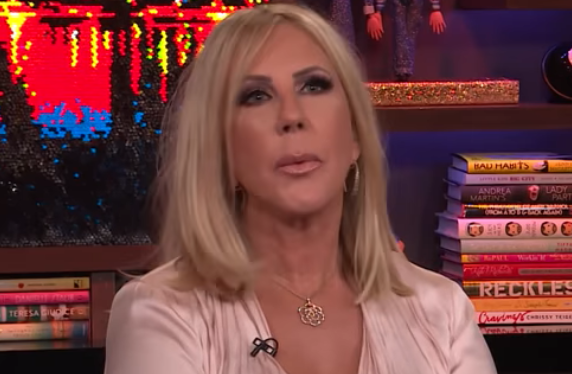 Real Housewives of Orange County hasn’t been back on that long. There have already been so many insults thrown back and forth on Twitter. Tamra Judge and Kelly Dodd have compared incomes, trashed each others’ partners, and tried to get the other fired. Now Vicki Gunvalson is telling Kelly Dodd what she thinks of her.

Vicki Gunvalson was demoted to a friend on RHOC but she’s very much stayed a part of the drama. She was roped into Kelly Dodd and Tamra Judge’s Twitter fight when Kelly called both of them stale. According to US Weekly Gunvalson and Dodd have had their disagreements before so they aren’t afraid to say how they really feel. Kelly Dodd said Gunvalson was trying to get her ex-husband together with a new woman. Gunvalson accused Kelly of doing cocaine, which she denied.

What Has Vicki Gunvalson Said In Retaliation For Kelly Dodd’s Stale Comments?

In an Instagram post Vicki Gunvalson said, “your only job is to find older rich men who want an arm ornament.” Ouch, that’s not very nice but Dodd brought on the insults when she dissed Tamra and Vicki.

In response to a post Reality Blurb made she replied, “I used to feel sorry for her, now I don’t. She is an angry, volatile person.” When addressing the stale comments she said, “Listen up girl. Our lives are always evolving. We don’t have story lines, it’s a reality show, our reality.”

#ad The wait is over for the premiere of #RHOC so grab a glass of wine and join me while watching. Tonight, I am going to be sipping on Louis Latour Pouilly Fuisse Chardonnay. It’s been a long time favorite in our household because it is powerful yet elegant. You can even get the same bottle from www.Wine.com. 🍷 With the code RHOC you can get 10% off any 6+ bottles! One-time use per customer and expires 8/31/19 at 11:59PM. #LouisLatour #Burgundy #chardonnay #whitewine #drinkwine #RHOC #Bravo @stevelodge_oc @wine_com

Tamra Judge Is On The Same Page Against Kelly Dodd

Vicki Gunvalson continued to dig at Kelly’s lack of employment by mentioning she herself is a successful business owner. She said, “you rent a 900 square foot apartment and pretend to be all smart.” A fan suggested Kelly may be acting the way she is because she’s hurt. The fan posted, “something happened to her. Because you just don’t have this much anger if you are mentally healthy.”

Tamra Judge replied, “I felt bad for her, but it bit me in the butt. She knows what’s coming up and worried. Going after Vicki and I right now makes her look bad. There’s a fine link between broken and evil. Keep watching.”

This keep watching comment means the reason the three of them are fighting is going to be revealed soon. There is still so much RHOC left to air so the drama with Vicki Gunvalson and others should keep coming every week. The truth is always revealed when the cast has to relive what happened from an outside perspective.