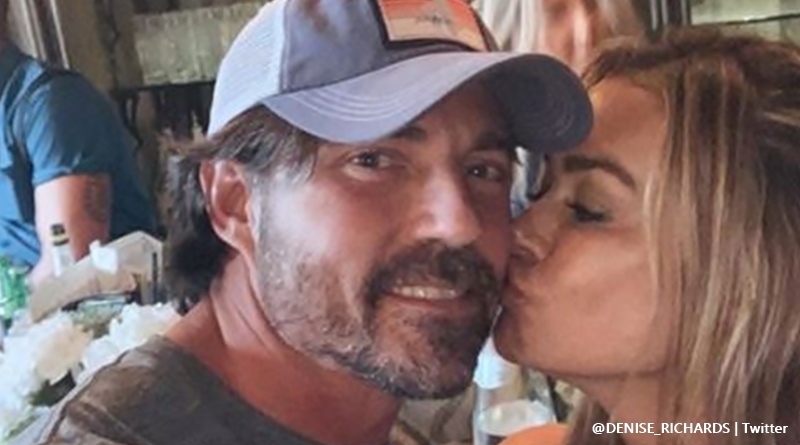 RHOBH fans saw the season end in acrimony and a lot of allegations about Lisa Vanderpump. But the drama continues to play out on Twitter. In a ding-dong Twitter fight, Denise Richards’s husband threatened to sue John Sessa of Vanderpump Dogs. Meanwhile, Lisa chipped in about the affair, and Denise went off on Lisa. In fact, it stemmed from Watch What Happens Live when Denise suddenly dissed Lisa over some “incidences” apparently off-camera.  Now Denise and Aaron Phypers pitched at TomTom for a date night. Team Lisa fans expressed their fury on Twitter.

RHOBH and the Aaron Phyper tiff over VP Dogs

To recap what heated up fast about the dogs, TV Shows Ace carried the story. In our article, we reported, “After Denise said they’d had issues, John Sessa implied Denise didn’t say thank you when they took the dogs in for her. Dr. John Sessa is Lisa Vanderpump’s partner at Vanderpump Dogs. He also was in the middle of the still going drama with Dorit Kemsley dubbed Puppygate so fans are familiar with him.”

Things escalated when John Sessa mentioned the dogs that got rescued and looked after, never came with any thanks or donations. Both Lisa and John could recall that as the only off-camera incident with them. It came when VP Dogs took in eight dogs for Denise during the Woosley Fires. So, all of a sudden, right at the end of the season, Denise Richards looked to have chosen to side with the ‘mean girls’ who ganged up on Lisa Vanderpump. So, fans from team Lisa vent their fury that they chose to visit TomTom.

Some outlets report Tom Tom date as proof of no feud

Hollywood Life picked up the story that RHOBH star Denise Richards and Aaron visited TomTom. They reported, “No bad blood here! Denise Richards, 48, and Aaron Phypers, 46, showed up at Lisa Vanderpump’s restaurant TomTom on Aug. 7, in an effort to prove there are no hard feelings between them, a source tells HollywoodLife.” Well, we only have the word for it from an unnamed source, that her reason was to show “no hard feelings.”

Allegedly, Lisa wasn’t at TomTom, and the couple was overheard talking about “no hard feelings.” Apparently, they had some drinks, did what you do in TomTom, and then went off into the night. Eyewitnesses apparently suggested that the whole ‘let’s go to TomTom’ thing was some kind of a “peace offering.” Well, if that’s really what it was, team Lisa fans kicked that ball out the court – hard.

The tweet that got Lisa Vanderpump fans in a froth showed the couple at TomTom. The photo caption said, “Date night with the hubby! You never know where we might show up #tomtom#pumprestaurant.” Immediate reaction came from Team Lisa who felt the RHOBH castmember had some gall pitching up. Lisa fan @PremierImage1 wrote, “You threaten someone with lawsuits and then show up at their restaurant? Lisa was so kind to you. So low class.”

Meanwhile, among many similar tweets, came this one from @fireflygirl123. They wrote, “So showing up at
@LisaVanderpump’s restaurant and you think all is forgiven? I think you still owe apologies and maybe donate some cash to VPDogs and while your at, let’s throw in an apology to @johnfsessa for threatening that lawsuit. #rhobh.”

I am extremely confused by u Denise…I am genuinely curious as to-
1. Why u went to A place owned by LVP especially after ur husbands mean tweet?
2. Why did u take a pic?
3.Why did u post it on twitter?
If I was a guessing person, I’d say it was kind of a F-u 2 her? Do tell!

The tweets raged on for a while, with very few people accepting this was some kind of “peace offering.” And, so far, Lisa Vanderpump remained silent. What do you think? Was this a peace offering or a jab at Lisa? Some people even suggested that Denise Richards and Aaron Phypers choosing TomTom for their date night was done as a dare. And, maybe Kyle Richards was behind it. Sound off your thoughts in the comments below.