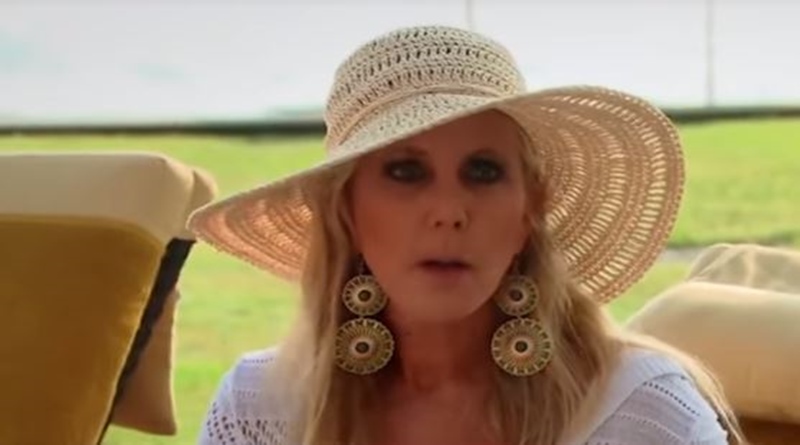 RHOC premiered Tuesday night for its 14th season and Vicki Gulvason wasn’t featured. We saw that the tag-lines, those one-liners that fans love featured. It involved  Shannon Beador, Tamra Judge, Kelly Dodd, Gina Kirschenheiter, and Emily Simpson. Oh, and not to forget the newbie, Braunwyn Windham-Burke. And, no Vicki. Droves of Gunvalson’s fans went across to her Instagram to commiserate.

Many fans of the Real Housewives of Orange County heard that Vicki was demoted to a friend of the show. Vicki seemingly took it well and posted that she’s “proud to be the OG of the OC.” But, the reality for her fans only really hit on the premiere night. Now, they’re outraged about the whole thing all over again. On her Instagram, many fans had a lot to say about it.

The anger from RHOC followers notched a bit higher when Vicki pointed out she’s not in the first episode. She wrote, “not tonight, sorry.” Here’s what some fans said about it:

These comments just reflect the feeling of a handful of the RHOC fans who went to talk it out on Vicki Gunvalson’s Instagram.

#ad The wait is over for the premiere of #RHOC so grab a glass of wine and join me while watching. Tonight, I am going to be sipping on Louis Latour Pouilly Fuisse Chardonnay. It’s been a long time favorite in our household because it is powerful yet elegant. You can even get the same bottle from www.Wine.com. 🍷 With the code RHOC you can get 10% off any 6+ bottles! One-time use per customer and expires 8/31/19 at 11:59PM. #LouisLatour #Burgundy #chardonnay #whitewine #drinkwine #RHOC #Bravo @stevelodge_oc @wine_com

Droves of fans are outraged, some blame Kelly Dodd

Actually, while a lot of the anger about Vicki’s demotion gets aimed at Andy Cohen, others blame Kelly Dodd. After all, the newcomer, Braunwyn Windham-Burke, is a friend of Kelly. Plus, they know that Vicki and Kelly got into a heated feud last season.

In fact, not all of the RHOC cast are happy with Kelly right now. Tamra Judge told Popculture, “I kind of played peacekeeper between [Kelly Dodd] and Vicki throughout the season. But near the end, Kelly turned on me…I’ll never speak to her again,…sometimes people go too low.”

In the same article, Popculture mentioned that Shannon Beador also mentioned Kelly Dodd. She noted, “There are a lot of things that happen with Kelly Dodd this season…Between she and a few people.” Meanwhile, Kelly’s got at least two people on her team. No doubt Braunwyn Windham-Burke will be aligned with her friend. Plus, it looks like Emily Simpson’s losing no sleep over Vicki’s demotion.

In fact, speaking to Domenick Nati, she said, “The Tres Amigas…Shannon, Vicki, and Tamra. They stick together very tightly and they don’t like to go outside their group, so I would be leery of trying to infiltrate that group.”

What do you think about the reality sinking in about Vicki Gunvalson’s demotion? Are you one of those many fans who feel bad for her? After all, she never even featured on the premiere episode with the Tag Liners. Sound off your thoughts in the comments below.