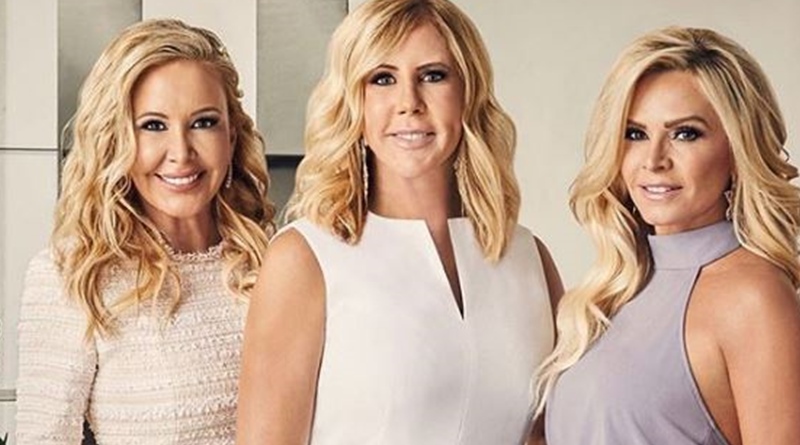 RHOC arrives on our screens this coming week, and fans can’t wait to see how new cast member Braunwyn Windham-Burke fits into the cast. Her life’s a busy one with a busload of kids. Plus there’s a book project in the works, and making quality time for her husband, Sean. With seven children ranging from diapers to teens, it’s a wonder she has time for the busy Bravo life. Now, she says she naturally avoids conflict, so what’s up with her in the never-ending conflict drama of the show?

RHOC newbie, Braunwyn Windham-Burke is a friend of Kelly

On her Bravo Bio, it says that Braunwyn knows “Kelly Dodd from the Balboa Bay Club.” Plus, while she’s got a busy home life, she’s up for a party. The Bio adds she’s”always ready for a mom’s night out.” Of course, it helps that she brings in two nannies to help raise the brood of kids. But, in a Bravo interview shared by People, she said that she learned more than just about those other OC ladies. In fact, she says she learned a lot about herself as well.

It seems that RHOC‘s newest member is a charming and pleasant woman. But, she spilled that for sure, there’s conflict in the upcoming season. Her main antagonist turned out as Tamra Judge, which is a bit surprising. Braunwyn said, “Friendships on this show are definitely tried and tested.” She adds, “If I had to say who I experienced the most friction with, it would probably be Tamra.”

According to Braunwyn, it was not a bad thing, in a way. That’s because Tamra helped her to face up to some things in her own mind. Actually, she notes that when those ladies want to get to know you, they mean the real you. This means really digging into yourself. In some way, Braunwyn feels that Tamra “really brought the best out in me.” That’s because she managed to do to that even when she did not “want it…brought out.”

In Braunwyn’s words, RHOC‘s Tamra really didn’t give her an “easy time” of it. But, now it seems she moved on, or she’s just very gracious about the drama. Obviously, we get to see this all play out on the new season. Hopefully, Kelly Dodd, her friend was able to deflect some of the more negative stuff. But, at the end of it all, Braunwyn realized that the ladies just wanted her to open up and let them know who she really was.

What’s rather interesting is the fact the Real Housewives shows are all riddled with conflict. And, no, it’s not just the ‘mean girls’ over on RHOBH either. We saw lots of people unhappy with Vicki Gunvalson on the show before as well. In fact, it’s believed the reason Vicki got demoted, which made space for the new girl, came over non-stop friction between her and Kelly Dodd.

Now, Braunwyn talks about how she’s just not into conflict. She said, “I hate conflict. It sounds hilarious coming from someone going a show known for conflict.” She adds, “I am a people-pleaser.” Plus, she says she found out she doesn’t just hate conflict, but she runs from it, “literally and figuratively.” So, fans now think about why Braunwyn Windham-Burke took the role in the first place? Will this all end in tears?

Sound off your thoughts in the comments below, and remember to check back with TV Shows Ace often for more news about the new season of RHOC.