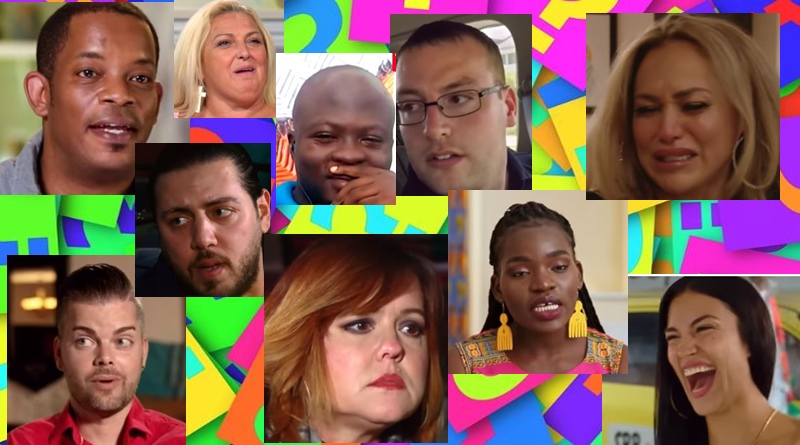 90 Day Fiance: Before the 90 Days premiered Season 3 on Sunday night. TLC fans agree this is a way-out cast and the drama plays out already across YouTube, Instagram, Twitter, Reddit, and Facebook. Getting stuck into it with little ado, the incredible naivety and trust issues burst straight onto our screens. In fact, some fans think there’s a level of ‘dumb’ that’s hard to comprehend. Of all the cast, which one will they love to hate the most?

90 Day Fiance: Before the 90 Days fans always choose someone to hate

People who faithfully watch and never tire of these odd relationships love the incredible craziness of it all. In the Before The 90 Days series, Americans fall in love online and then travel to the home country of their intended spouse. There, they hope to get engaged and bring their new love back to the USA. This season the series brought back Darcey and Angela Deem. But, it’s not likely they will be the top-rated people to hate. They’re old news and just about do everything we saw before.

The new couples bring more interest, and into the very first episode, it looks like the women are in the lead for hating on. You have Rebecca, who already experienced a similar marriage but now finds Zeid in Tunisia. Fans straight away said she catfished him, as she used so many filters to look young. Plus, she never got around to telling him she’s still married, but going through a divorce. So, Rachel is on the ‘dumb’ list, rather than the hate list.

Remaining couples and fan reaction to them

With Darcey, Angela, and Rebecca on the annoying or dumb list, that leaves Caesar and Maria, Avery and Omar, Timothy and Jeniffer and Benjamin and Akinyi. We haven’t seen much of Benjamin yet, so the court’s out on that one for the time being. Narrowing it down, now that leaves Avery, Jennifer, and Maria on social media’s hit list. So, who’s who in this bunch of the leftovers in 90 Day Fiance?

First up, we have Avery Mills who hails from Columbus, Ohio. Aged 19, she’s already converted to the Muslim faith and met Omar Albakkaur from Syria. Meeting through a Muslim dating site, nothing’s going to stop her. General consensus on Reddit is that she’s selfish, attention-seeking, and cares not one fig what her family thinks or feel. Oh yeah, and throw immature into the mix of late-teen rebellion. It’s a hot mess and definitely can expect some shade this season. But, she’s not likely to be the top person to hate on this season of 90 Day Fiance.

Timothy and Jennifer on 90 Day Fiance

Timothy and Jennifer both promise some drama. Reddit’s opinion is she’s a gold-digging Columbian. Plus Timothy’s ex can’t let go of him. Jealous Latino temperaments and an ex hovering around will bring derision, for sure. That slots them in at about the second-most likely people to get loads of hate on social media. This leaves Maria at the top of the most likely to get the hate list.

Ceasar’s a really nice guy. He works hard as a nail technician and has long term clients. (He could have tried dating any of them). But, after his last long-term girlfriend broke it off, he’s heartbroken. Now, he just dreams of sharing his life with someone special. And, he chose Maria via a site that hooks up Americans with Ukrainians. She’s beautiful, and tells him she loves him all the time.  Fans already like Ceasar for being a nice guy and already slotted him into the dumbest most scammed person on the show.

The top person on the love to hate list

Maria’s using Ceasar, says his co-workers and even his clients. They dated online for five years now, and three times, she wriggled out of ever meeting him in person. Struggling for cash, Ceasar sends her about $800 a month. He threw away a lot of money on travel for Maria that never worked out. She messes him about with wanting a trip to Mexico which he can’t afford. Certainly, it looks like Maria’s probably got some pieces on the side and prefers his money to actually meeting up and making out.

This woman never used his name in any of her many little videos and chats between them. She’s come up with every excuse under the sun to not meet him. That makes people suspicious that she has no intention of letting Ceasar meet her family in Ukraine. Most 90 Day Fiance fans think she’s a scammer and Ceasar’s being played. The hate’s more likely to go her way than anyone else, including Ceasar. He’s just a nice guy, too nice and dumb, but they don’t hate him.

So, it looks like this season of the show will see fans hate a lot on Maria. What do you think? Do you think she’s just scamming and using Ceasar? Sound off your thoughts in the comments below.

Remember to check back often with TV Shows Ace for more news and opinions about 90 Day Fiance: Before the 90 Days.