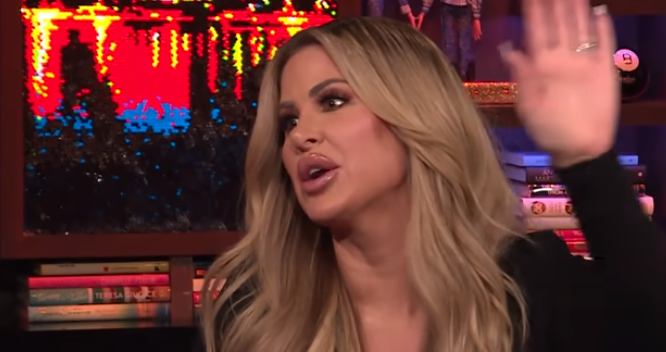 Recently it was reported Kim Zolciak-Biermann from Don’t Be Tardy had gotten the police involved when she had a disagreement with some Delta agents. She said the whole family had been deplaned because her husband was filling out paperwork for a service animal.

Brielle Biermann, Kim’s daughter, also on Don’t Be Tardy, tweeted about it bringing it to the attention of the world. Now there’s more information available about what went down at the Delta airport. Brielle seemed very angry in her tweet and alarmed her fans that something crazy had gone down.

According to Too Fab, Kim had gone to the bathroom on the plane and when she returned her sons had been removed from on-board. She’d taken her five-year-old daughter to the bathroom.

The statement from Delta was that the Don’t Be Tardy star and her children boarded while Kroy Biermann filled out the paperwork. When he arrived at the gate after the doors shut then they came up with an alternative plan when he didn’t get on the flight. They don’t seem to be admitting to taking the young children off the plane without their mom.

How Did The Reality Star React To This Incident?

Kim panicked when she realized her children were no longer on the plane along with her. It’s understandable since her very young children had disappeared in a matter of minutes.

She rushed off with Kaia and Kane to confront the first Delta person she saw. Kim stated on her podcast she was so upset, “Kash is hyperventilating, these kids are eight, six, and five. They’ve been taken off the plane by a man they don’t know?” Brielle and Ariana also got off the plane hearing Kash and their siblings so upset.

She continued to say, “it’s a criminal thing when you’re taking kids off a plane and people’s bags.” The Don’t Be Tardy star said Kroy arrived just after they got off the plane. The doors closed and they were forced to get a flight for the next day.

In a post on OK Magazine the article says she also said, “These are little kids, dude. That’s what got me so mad. It wasn’t that I wasn’t on this flight. It wasn’t that I was entitled cause I was in first class. Yeah, we paid thousands of dollars for these tickets, that’s irrelevant. My biggest problem is that you removed my children.” Despite Delta denying her recollection of events, Kim doubled down on her anger towards the airline. There’s no doubt she’ll take this as far as she has to.

They have recently been filming another season of Don’t Be Tardy for Bravo.