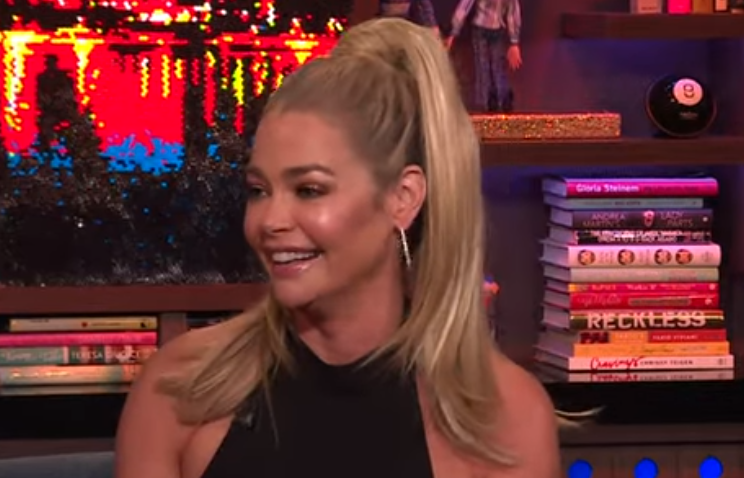 The RHOBH reunion has covered Puppy Gate, Camille not wanting the wives at her wedding, and people saying how they really feel. There have been some things that developed during the reunion that didn’t air.

Denise Richards isn’t afraid to speak out about the things that didn’t get aired and reveal that she was offended. The Watch What Happens Live where Denise talked about the reunion is where she said there was more drama behind the scenes.

What RHOBH Drama Happened Behind The Scenes That Offended Denise?

One Twitter Denise said, “my daughter’s biological father is African American I found some of her comments quite offensive.” According to Too Fab Denise said Camille should be thankful what she said didn’t end up on air. One the WWHL Andy showed a backstage video where he told Camille, “you said Denise was boring and that you don’t care for her.” Camille agreed.

Denise told Andy too, she was surprised when Camille came after her. She said, Grammer had texted her and apologized for their argument about Denise cursing her daughter. She thought all was well before the reunion.

Denise Also Argued A Little With Lisa Vanderpump On Twitter

Denise Richards also had words with former RHOBH star, Lisa Vanderpump over fan’s tweets about Denise and her. A fan said she sidestepped a question on WWHL about LVP and where their relationship was. Denise said there were incidents that occurred off-camera.

Lisa said “Wow? The only ‘incident’ we had outside of production was when you asked us to take 8 of your fostered dogs from the Malibu fires and @vanderpumpdogs rescued them, in this crisis, when we were at capacity. Why all the hate?” That one doesn’t sound negative at all if that is what she was talking about.

Denise responded in a respectful way to LVP saying she’d always respected the work she did. She said they were dogs she helped during the fires and she was grateful Vanderpump Dogs found them homes.

Camille and Denise going back and forth isn’t shocking. Thursday Camille had called her RHOBH co-stars trash and hypocrites. All of this continues and will until the new season airs, at least it keeps fans involved. Denise still remains one of the only housewives to conduct herself with poise and not get completely taken over by the drama.

Make sure you don’t miss The Real Housewives of Beverly Hills when it returns for a new season on Bravo.

Hannah Ferrier Could Return On ‘Below Deck Australia’ And Here’s Why
‘LPBW’: Pregnant Isabel Roloff SLAMMED For Being A Hypocrite
‘Teen Mom’ Maci Bookout Called ‘Distasteful’
Is Hannah Brown Engaged? Star Sports Giant Ring At Birthday Party
Jana Duggar Gets Close And Comfy With New Guy – Who Is He?