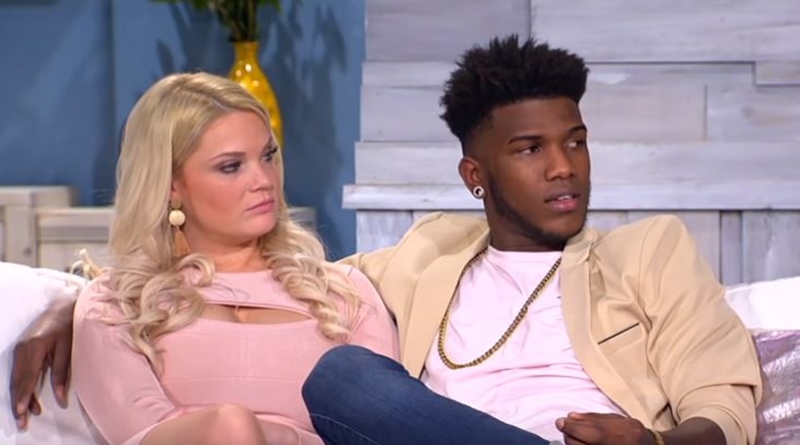 90 Day Fiance fans saw some crazy relationships through the years, but Ashley Martson and Jay Smith’s comes with more ups and downs and rumors than most. Right now, rumors that Jay’s girlfriend’s pregnant circulates across the Internet. They started with Ashley who spoke to the Domenick Nati Show about it and she claimed the pregnancy’s for real. What’s already complicated just seems to have become even more complex.

Depending on how far you believe the TLC show’s storyline, Ashley met Jay, fell in love and took him back to the USA. She claimed he lied to her about his age. She though he was 26. However, according to Jay’s sister Raine Smith, she met him when he was just 17-years old. So, there are allegations she used a teen. Anyway, the story goes that Jay cheated on Tinder and Ashley never forgave him. Later, we saw scenes involving the barbershop and allegations of a new girlfriend.

Much drama came, as Ashley filed for divorce several times, but this time she intends to go through with it. However, Ashley claims that Jay won’t sign the divorce papers. It all culminated in a clash at Jay’s apartment, where Ashley threw a fire-extinguisher through his window. She’s pending a hearing for alleged assault and mischief. In the meantime, Jay violated a PFA order that Ashley filed. Jay got arrested and went to jail under ICE suspicions. Now released from detention on bail, it looks like things got more complex for the 90 Day Fiance couple.

Ashley brought Jay to the USA and wants to be shot of the 90 Day Fiance alum. From her viewpoint, why should she support him when he cheated? Even more so, now that his girlfriend might be pregnant. It looks like Ashley did a lot of digging into the relationship. If you don’t know, the girlfriend, Kay, started the Gofundme to get Jay a lawyer while he sat in jail. Obviously fully invested in him, we saw her jump into his arms after his release.

90 Day Fiance alum Ashley said on The Domenick Nati Show, that she could get Jay out of detention by sponsoring him. However, she’s reluctant to do that. She mentioned that she would then become “responsible for him for ten years.” In the light of rumors that her husband’s girlfriend’s pregnant, why should she take up that burden of someone else’s child? Ashley also notes she’s reluctant to take on finances for an ex-stripper. She also said that Kay looked pregnant at the court case.

Here are the complications in a nutshell

Ashley filed for divorce and stands by it this time. However, Jay won’t sign the divorce papers, and Ashley alleges he wants half of her property. In the meantime, he’s still married to her but living with a new girlfriend that Ashley says is pregnant by him. 90 Day Fiance‘s Ashley is understandably not keen to sponsor him or give him half her property. Essentially, that would mean taking on Jay’s new family relationships.

Right now, it looks like a no-win situation for Ashley, but she claims to have a “savage attorney” and trusts him to help sort out the mess.