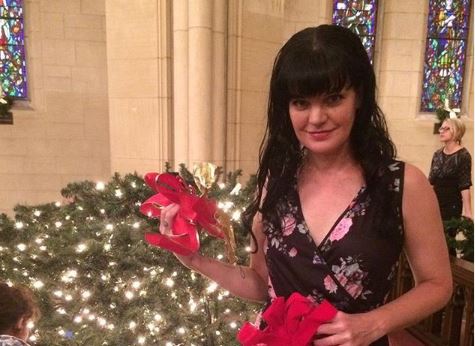 According to TV Line, Kelly Kahl shared that she could not speak of Pauley’s tweets, but did address that actress had come to them with a workplace issue. Above all, they investigated and resolved the issue.

“I can’t speak to what she’s addressing in her tweets. She did come to us a couple years ago with a workplace concern. We immediately investigated it and we resolved it to everyone’s satisfaction.”

Kahl also pointed out that if the NCIS actress was not comfortable with how CBS dealt with these issues, he “didn’t think” she would be back with them for her new mid-season comedy, Broke.

“We are very happy to have her on the air again this year with us, and I don’t think she would be back with us if she had huge concerns.”

Back in June, TV Shows Ace reported that Pauley Perrette had gone to social media to declare that she was “terrified” of her former co-star, Mark Harmon. This came about because fans had been posting to her Twitter account for her return to NCIS. She emphatically stated that she was never going to reprise her role as Abby Sciuto.

“NO I AM NOT COMING BACK! EVER! (Please stop asking?) I am terrified of Harmon and him attacking me. I have nightmares about it. I have a new show that is SAFE AND HAPPY! You’ll love it!#HappyPlace Love y’all!”

After that, two hours later, in a now deleted tweet, Perrette posted a photo of a someone that she alluded to as being a crew member. They had a swollen eye, clearly injured.

“You think I didn’t expect blow back? You got me wrong. THIS happened To my crew member and I fought like hell to keep it from happening again! To protect my crew! And then I was physically assaulted for saying NO!?and I lost my job.”

From NCIS To Broke

In conclusion, as Kelly Kahl did not address Pauley Perrette’s tweets, this means he did not address Pauley’s declaration that she lost her job because she supported a crew member. Subsequently, Pauley is no longer on NCIS, but she is starring in a new mid-season comedy called Broke. However, Broke is also on CBS. In conclusion, Kahl has determined that Pauley has resolved her issues, as she remains at CBS.

As for now, NCIS fans are pretty thrilled that Ziva David (Cote de Pablo) is back, if only on a temporary basis. To sum it up, many fans may still hold out hope that Abby Sciuto will be back to NCIS as well.

Do you miss Pauley Perrette on NCIS? Will you watch Broke? Please share your thoughts in the comments field below. Check back with TV Shows Ace for more information on NCIS and the upcoming premiere of Broke.