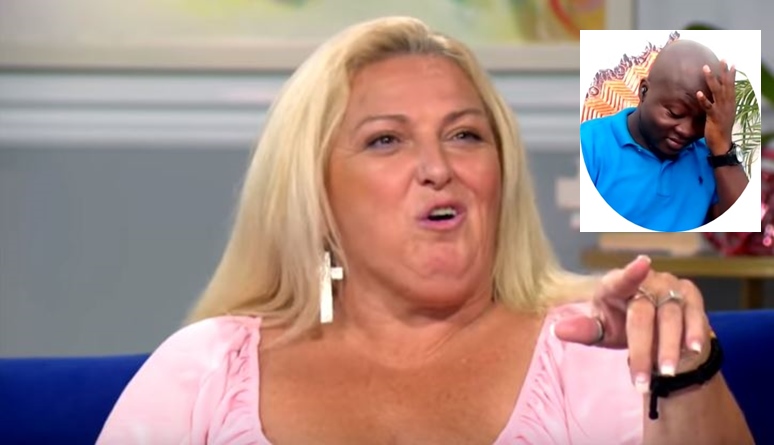 90 Day Fiance: Before The 90 Days sees the return of Angela Deem and her Nigerian man, Michael Ilesanmi. Angela’s from Georgia and the upcoming synopsis suggests they still work on the issues in their lives. We’ll see her return to Nigeria and Michael’s getting a choice. Basically, she’ll tell him to shape up or ship out. But it emerges that Angela might have a choice to make as well, as it seems Michel wants her to have a baby. Is that even possible? Fans ask this because she’s in her fifties.

90 Day Fiance: Before The 90 Days blink and miss Angela Deem talking about having a baby

90 Day Fiance fans can’t get enough of the unusual couples in the TLC franchise. That’s why most of them are “so there” for this new season of Before the 90 Days. The show arrives in early August, and already, fans freak over a blink-or-you-miss-it line in a TLC sneak peek clip. It cuts through it so fast, you almost think they’re talking about another couple. But, nope! Angela clearly says, “Michael wants me to have a baby.” It comes along with a scan, but we don’t know if that’s Angela’s scan.

Well, we first saw this couple on the same show, and they never managed to make a go of it. The most startling fact that was that she’s nearly 20 years older than him. The last time we saw them, everything blew up at the Tell-All when Angela lost it. Michael remained in Nigeria. Expecting more ho-hum cultural and age differences, it seems nobody expected their return to bring a baby into the picture.

Michael Ilesanmi thinks Angela should have a baby, fans react

The 90dayfiancenews account on Instagram popped up a short TLC snippet that got people freaking. There’s not much more to it than Angela saying Michael wants a baby, but people wonder if it’s even possible? Here’s what some 90 Day Fiance fans said about that:

Quite a few others asked about being able to grow babies after 50. More than one 90 Day Fiance fan asked it’s even possible.

Is it possible to have a baby in your 50s?

Well, according to The Guardian, a UK mainstream outlet, “The number of births to women aged over 50 is soaring.” They add, “The Office for National Statistics showed the number of births to 50-plus women has quadrupled over the last two decades, up from 55 in 2001 to 238 in 2016. During that period there were 1,859 births in the UK to women over 50, and 153 to women over 55.”

In fact, they point out that some famous faces managed babies at 50 or more. These include Brigitte Nielsen, actress, singer Janet Jackson, and US Senator Tammy Duckworth. However, parentingfirst.com notes that “Healthy maternal conception after 50 often only takes place after extensive fertility treatments and with the help of donor eggs.” They also note that “Even if a woman were to get pregnant in her fifties, there is a high chance that the baby will be born with birth defects or the pregnancy does not reach maturity and ends in a miscarriage.”

It looks like 90 Day Fiance‘s Angela could carry a baby, or at least become pregnant one way or another. But would it really be worth the risk? In many African cultures, making babies is important to both men and women. A woman who’s barren is traditionally useless to the clan. For the male, it’s a sign of poor virility to conceive no children or even too many girls. Now, we’re not saying that the specific tribal ancestry of Michael comes with these cultural prejudices, but it might reveal yet another gap between these two, and mean more issues for them to work through.

What do you think about the fact that Michael Ilesanmi wants a baby with Angela Deem? Even if it’s possible, do think she should risk it? Sound off your thoughts in the comments below.

Remember to check back with TV Shows Ace often for more news about 90 Day Fiance: Before The 90 Days.

’90 Day Fiance’ Spoilers: Are Syngin And Tania Still Together?
Kylie Jenner Shows Off Baby Bump In Little Crop Top
Lance Bass Dishes On His ‘BIP’ Experience, Plus Engagement Predictions
Could There Be A Baby Number 4 For Jade Roper & Tanner Tolbert?
‘When Calls The Heart’s’ Erin Krakow Shows Her Support For Olivia Jade