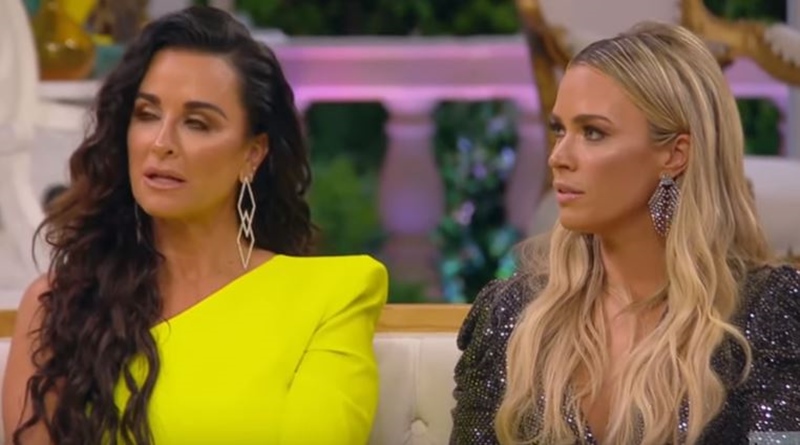 RHOBH fans saw Andy Cohen pretty much throw Teddi Mellencamp under the bus over her part in the ‘Puppygate’ scandal. He focussed on the time when they were out at a ladies’ dinner during the season. Teddi, heavily invested in the whole LVP scandal, got a bit heated and denied that she had anything to do with the plot. Additionally, she pushed the fact that she never lies. However, a little too late, she took to Twitter saying she’s taking some accountability. Nevertheless, less than satisfied fans slam her repeatedly.

During the Reunion, which was all about LVP and the eternal Dorit Kemsley dog drama, Andy said to Mellencamp, “It’s striking to me when you said at the table, ‘I never lie.’ Weren’t you still lying because the others didn’t know…” Put on the back foot, Teddi suddenly had a change of heart about accountability and gave a luke-warm response. Her answer:  “I definitely learned my lesson in speaking in absolutes.”

Eventually, Andy managed to pinpoint the lie. He took it further, wondering why she even tried to plonk herself in the middle of ‘Puppygate?” After all, Dorit and the dog drama never involved her in the first place. “I wish I would have never brought it up again,” she said. Well, it looks like we all know Teddi’s a liar, but some admiration came out when she posted on Twitter about taking accountability.

Well, the funny part of the accountability part is that she runs a business all centered around accountability. Bravo’s Daily Dish noted that Andy picked up on that, saying, “First, on tonight’s Part 2 of The Real Housewives of Beverly Hills reunion, I auditioned to be Teddi’s next accountability coach, and I probably would have gotten the job if I didn’t pick her to be my first client,” Andy said.”

Anyway, the long and the short of it is that Teddi finally had to say something. So taking to Twitter, she wrote, “I know I wasn’t forthcoming about the exact details of doggygate. I am not proud of my initial instinct to give a convenient — and not completely honest — account of events. I didn’t live up to my own standards through my actions and that’s what’s most difficult of all.” While some people accept that, many RHOBH fans are not impressed.

I know I wasn’t forthcoming about the exact details of doggygate. I am not proud of my initial instinct to give a convenient — and not completely honest — account of events. I didn’t live up to my own standards through my actions and that’s what’s most difficult of all. #RHOBH

Back in the olden days before the Internet brought instant information, people seemed more forgiving if a person apologized…kind of. Teddi clearly never actually apologized, many RHOBH fans feel. They slammed her. As @Sainsbebe noted, “Be forthcoming and honest right now! Did Kyle know what you were up to before going to Vanderpump Dogs? Own it Teddi! Let’s see if you can be honest with a tough question. I know the answer. Do not lie.”

Many others chipped in with Kenon’s account writing, “You got caught! When you realized you mistakenly thought LVP “gave the order” and you were going down, all of a sudden you had a spiritual rebirth. No one is buying it like no one’s buying Beverly Beach.” Meanwhile, LaurieH said, “Teddi, Maybe consider apologizing to LVP and the fans. It would be the right thing to do.”

However, other fans thought that taking accountability was the right thing or at least a step in the right direction. What do you think about Teddi Mellencamp’s rather tepid apology? After all, it’s not really an apology after all. Sound off your thoughts in the comments below.