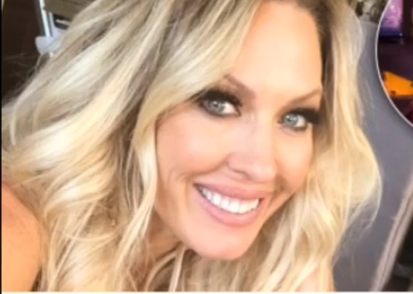 There’s a new housewife on the block in RHOC. Braunwyn Windham-Burke is a mother of seven and brings a bit of a different perspective to the show. The younger woman is replacing Vicki Gunvalson who recently got demoted to a friend of the housewives.

Braunwyn Windham-Burke Goes For Her First Press Day For RHOC

In an article on Ok Magazine the new housewife looks right at home on Extra. In a video on her Instagram story, she said she felt really nervous and excited about it. It was her first press day. She’s married to the CEO of tech centers Channelstars, Sean Burke. She has children from babies to teenagers and a mommy blog called Barefoot in Heels. She hopes to turn her blog into a book.

The Rookie Housewife Is Learning The Ropes Filming With RHOC

An article on Bravo TV said she was a superfan of the show since the beginning. On a later Instagram story, she said, that just ended up being the best day. I got to talk about our show, the good times, bad times, and the friends I’ve made.”

She said something that’s different for her being on the show is drinking because she doesn’t do it that often. She doesn’t keep alcohol in her house and when they were out she, “drank tequila like water.” She also had to get used to eating on camera because it really freaked her out.

The 41-year-old is getting chummy with Kelly Dodd. This is a move that teases there might be some tension with Vicki Gunvalson because Kelly recently became an enemy. Bravo insiders said Braunwyn Windham-Burke did not replace Vicki as the decision to have her join the cast was made before Vicki was demoted. Still, Vicki is still going to be around and is a presence in the trailer when things get heated.

According to Radar Online Kelly, Braunwyn, and Shannon Beador went out dancing together at The Quiet Woman. An insider said, “it’s rare for Shannon to take to a new cast member as she has to Braunwyn.” This speaks highly of the new housewife to blend in with the alums as a rookie.

Watching the trailer for the new season shows a lot of drinking, a lot of fighting, and a lot of making out. One of the making out scenes is between two of the housewives. It’s going to be a wild ride this time around and we’re here for it.