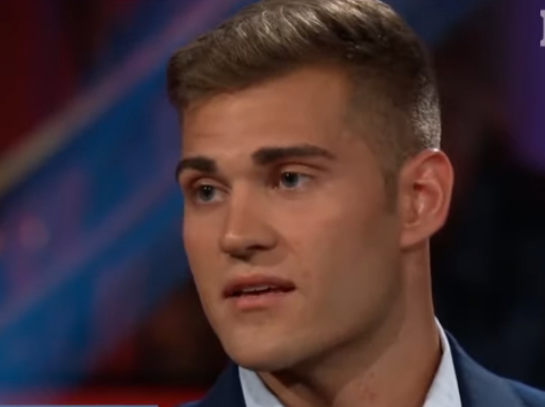 Reality Steve said his reader emails this week were full of people taking up for Luke P. He directed his readers to an article on Flare about Bachelorette productions role in bringing him back. He said the return didn’t happen during the rose ceremony without production knowing.

They allowed it and possibly orchestrated it. The article goes on to talk about how production operates and why they would bring Luke back.

Bachelorette Production Had A Role In Bringing Back Luke P.

Luke P. came back after elimination to get closure from Hannah and it was hard to watch.  Luke is the definition of a villain with his slut-shaming of and talking down to Hannah. Bachelorette villains are notoriously entertaining to take in on the show.

Reality Steve said, “as a contestant you don’t get in a car by yourself and say take me to where they’re filming.” Production had to help him get there. The blogger goes on to say it happened because production allowed it to happen. They set up transport to the set and the camera he used to film the walk-up.

The article says villians returning is a staple in shows like the Bachelorette. Reality Steve says, “without a villain, it would be boring.”

He stated past contestants were chosen for that reason. Lee Garrett from Bachelorette for his history of racists tweets or the very aggressive Chad Johnson. Flare says they aren’t taking the blame away from Luke P. They said he needs to check himself, but it’s production’s fault as well.

I love visiting Boulder, CO it’s one of the most beautiful places I have spent time, not to mention it is the home and training grounds for elite athletes and olympians from around the world. I always leave this place fired up to train. When you’re bumping into elite athletes at every corner and the average 50 year old can run faster than you it will get you thinking right! This culture of elite performance is on display at the @cusmpc I have spent some time here this week learning about my physiology and breaking down my swim stroke in the swim flume with @eneyjones Thank you so much for a great session and all of the drills to work on! 💪😎👍 #crossfitswimming #roadtothegames #crossfitgames #swimstroke #faithfuloverfamous

How Do Others Feel About Luke After His Return And Excuses?

Women’s rights activist Julie Lalonde says, “it’s dangerous to continue these tropes where the woman is being assertive about her boundaries and gets applauded for it. The reason is because this negates the danger of him being on the show.”

Lalonde also says, “production needs to take responsibility for this, but the best we can hope is not seeing Luke P on Bachelor in Paradise. Actress Patti Murin tweeted, “Luke is too dangerous to be on Bachelor in Paradise.” She said, “don’t allow him to terrorize any other humans.” Regardless of whether Luke P. was following directions or acting on his own accord, he certainly made his mark as a villain among Bachelorette fans.

Don’t miss the big Bachelorette finale next Monday and Tuesday night on ABC.

‘Outdaughtered’ Uncle Dale Gets The Best Father’s Day Gift Ever
Why Did Cody, Abigail’s Son, Visit The ‘When Calls The Heart’ Set?
‘Love After Lockup’ Stars Brittany & Marcelino Jet Off To Paradise
Lindsie Chrisley Snubs Todd On Father’s Day 2021
’90 Day Fiance’ Source Says Rebecca And Zied Are In Troubled Waters