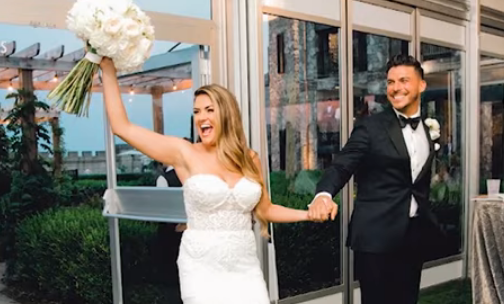 Vanderpump Rules stars Jax Taylor and Brittany Cartwright Taylor have not been married that long. An insider says there is already trouble in paradise. This is just an insider speaking and so far the couple hasn’t admitted to anything.

The nuptials were over-the-top just like Britanny wanted and Vanderpump Rules cameras rolled the whole time. They had over 200 guests for the big event in Kentucky.

An insider of the Vanderpump Rules cast says Brittany wanted a huge wedding and for all of it to play out on television. Perhaps the dream didn’t live up to the reality of being married. The newlyweds have only been hitched for a little less than a month, but a source told Radar Online they are unhappy with the way things are.

Brittany has been jealous of Jax before and suspicious of what he’s doing. She doesn’t seem to trust him anymore now that they’re married. An article on Reality Blurb reminded readers Jax had admitted to cheating on Brittany with Faith Stowers a couple of years ago.

She had forgiven him but now worries about his wandering eye. A source says Brittany thought when they were married it would fix all her insecurities, but it allegedly hasn’t.

On top of all of it, Jax is worried about the amount of money Brittany is spending. A source said, “all of his money is now hers and she loves to spend.” There wasn’t a prenup so if things do go south, he will find himself even more worried about money.

The couple also paid 1.9 million for a new house at the beginning of the year so that put a dent in their finances as well.

A New Cast Member May Make Things Harder For The Couple

Recently we reported a new cast member would be joining the Vanderpump Rules crew. The new addition, Dayna Kathan is someone who brings drama for the couple. Dayna has worked for SUR and is friends with James Kennedy. She’s clashed with Jax and Brittany briefly on the show.

A report on Hollywood Life said Dayna was actually in the background of Jax’s staycation facetime with Brittany. He said there were women there and Brittany called her a whore.

There will be plenty of drama on the show if she’s in the mix and the couple is having issues with their marriage. Make sure you don’t miss Vanderpump Rules when it returns to Bravo.

Update: Jax is now responding to the rumors.