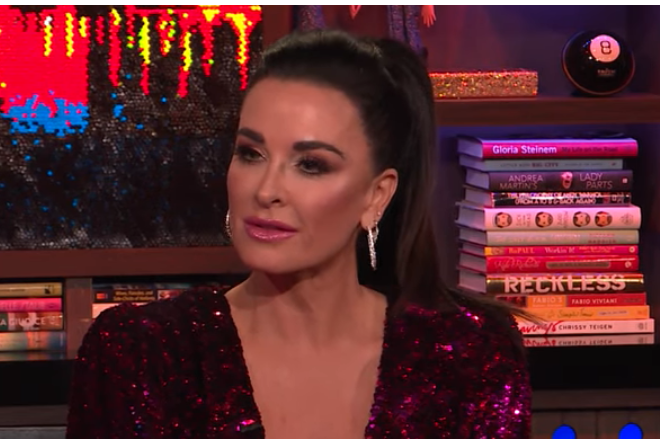 Kyle Richards has her own theories about Lisa Vanderpump, and shared them at the reunion.

By now you know Lisa Vanderpump wasn’t present at the reunion. She announced she quit the show the day before it premiered and would be taking less of a role on Vanderpump Rules.

In the video Kyle Richards said Vanderpump did the interview about quitting RHOBH for a reason. She said she did it because she knew if she didn’t show up to the reunion, she would be fired. She told Andy, “like you had to with Adrienne.”

On People Now Sam Bellikoff said Kyle Richards was referring to Adrienne Maloof. In 2013 Adrienne Maloof, according to Buzz Feed, was fired from the Real Housewives of Beverly Hills after she didn’t show up to the reunion. She maintained that she quit on her own. It seems Richards thinks history is repeating itself.  The host didn’t agree the same thing would happen to Lisa because of her importance to the show.

Andy Cohen had this to say about her not showing according to People. “I’m not going to do a Lisa rebuttal show. Her time to talk was the reunion and she gave that up.”

How Does Richards Feel About Her Friendship With Lisa Vanderpump Now?

I’m so grateful I found Brilliant Burnout, by Dr. Nisha Jackson. It’s a step-by-step guide to feeling vibrant, balanced, and getting back to the top of your game! 💛#BrilliantBurnout

According to People the real housewives  caught up in the finale and all the stars were there besides Lisa Vanderpump.

Kyle said she had ran into Lisa after the fight they had. She apologized for the way things had turned out and tried to exchange pleasantries.

Vanderpump replied well, “you called me a liar.”

Kyle said she did not call her a liar. Vanderpump was referring to the housewives thinking she leaked the story of Dorit Kemsley’s dog. Kyle was the one to confront her about it. Kyle Richards said she was “a lot more invested in their friendship than Lisa was.” Despite this realization she said she, “felt lighter after having the conversation.”

Lisa Rinna also had a run in with her but hers wasn’t so pleasant. They exchanged a few words while Vanderpump was trying to get money with wet nails to pay the valet.

Since she was struggling Rinna said, “do you need some money?”

Vanderpump replied. “if she did, she wouldn’t take it from her.”

Kyle Richards and Lisa Vanderpump used to be inseparable. It’s sad these two besties couldn’t come together and work it out.

Make sure you don’t miss new episodes of RHOBH.