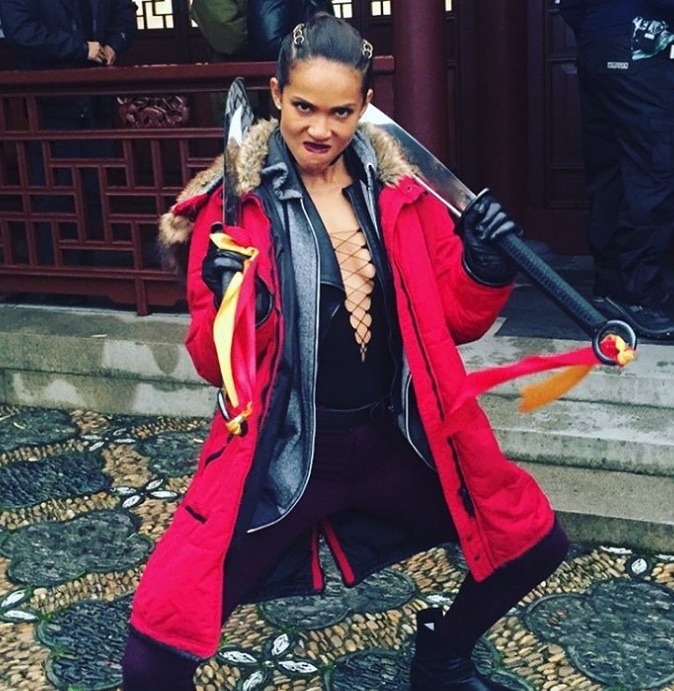 On Thursday, she shared that her son and President had the same birthday. She is proud of both.

Lesley-Ann Brandt is of Dutch, Spanish, German and East Indian descent. Born in Cape Town, she speaks Afrikans. The 37-year-old actress explained that she loved her life in the beautiful, post-Apartheid Cape Town. This is such a big part of her that she has a tattoo on her upper right side of the continent of Africa, with a dot on Cape Town. According to AUSXIP, the Lucifer actress was a teen when she moved with her parents and younger brother to New Zealand.

While in quiet New Zealand, she began modeling, which led to acting. Her first major role was on Spartacus: Blood and Sand, where she worked with Lucy Lawless. There, Lucy encouraged Lesley-Ann’s singing, as she comes from a “very musical family.” Of course, Lucifer fans know that fact as in Season 4, she sang an incredible version of the Oasis song, “Wonderwall.”

According to Bride’s, Lesley-Ann’s grandfather called her Appeltjie, which means “little apple.” Right before she wed her husband Chris Payne Gilbert, he sent her a special package. It was two gold rings melted down into a pendant. The word “Appeltjie” was engraved on the bespoke piece of jewelry. This special gift was in honor of her grandfather, whom she was “incredibly close” to. He had passed on several years prior to their 2015 wedding. She explained that she was “thinking of him” that entire day.

She must have also thought of her grandmother, as the couple did not have a wedding cake. Her grandmother baked beautiful wedding cakes, but she had also passed on a few years prior to the wedding. Instead, Lesley-Ann and Chris had a dessert bar. The couple now have a son, Kingston Payne Brandt-Gilbert, who just turned two today on July 18.

Lesley-Ann used her own personal experiences when portraying Maze. Brandt told MEAWW that she used her move from her native South Africa to New Zealand as inspiration for Mazikeen wishing to go back home to hell.

“…When she (Mazikeen) wants to go back home. I felt that when I immigrated from South Africa to New Zealand I didn’t really like the country then. I was young, I was seventeen. It was a hard time for a child to leave their friends, their culture, their country behind. And Maze is going through pretty much what I was going through.”

Lesley-Ann also leans into the physicality of the role. She trains 5-6 days a week with her coach Paolo Mascitti to get that kick-butt body. This is the same fitness guru that her Lucifer co-stars Tom Ellis and Kevin Alejandro use to get their own buff bods.

Brandt Read The Original Comic After Being Cast

Lesley-Ann didn’t read Neil Gaiman’s Sandman comics until after she was cast as Mazikeen. The actress admitted that she “fell in love” with Maze even more. She loved this character when she read the original Tom Kapinos script, but the original took that love up a notch.

Lesley-Ann Brandt Was Not The Original Maze

Lesley-Ann seems perfect as the pansexual archdemon torturer, but she was not originally chosen to play Mazikeen. Instead, Linda Esco was the original Maze. Yet, Deadline reports that after the pilot table read, Esco was released and Brandt was brought in. Linda Esco can now be seen in S.W.A.T. portraying the polyamorous Christina Alonso.

Don’t miss Lucifer when it returns to Netflix with new episodes.