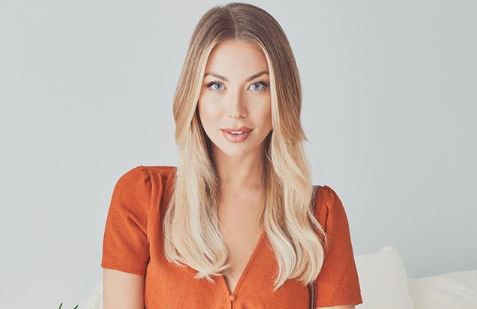 On Straight Up With Stassi you get even more of an inside look on her life and opinions. The Vanderpump Rules star takes on everything from too many pregnancy photo shoots to Megan Markle with Katie Maloney. Stassi Schroeder does not care what people think of her opinion and she’s happy to share it.

Katie and Stassi both think people are being too extra with their gender reveals and all things baby. They start off with a bit of a disclaimer saying, they know they’ve never had a baby. Each acknowledges that they might both be more extra than the people they’re talking about.

The two Vanderpump Rules stars say are sick of looking at Instagram and just seeing babies. The pregnancy photo shoots and the reveals are too much.

Stassi says she’ll never have a gender reveal that is like a wedding. They stalked someone they knew who had a gender reveal that was so extravagant it was like a huge wedding. Both girls don’t think people care if you’re having a girl or a boy. The girls say that they really can’t talk about over-sharing because of Vanderpump Rules, but they think keeping somethings private is a good thing.

They acknowledge they watch and look at the pictures but they still hate watching it.

The girls complimented Jessica Simpson on sharing swollen ankles and Amy Schumer sharing the miserable side.

You guys know how much I love hot dogs and sausages (see my Stassiages highlight lol), so you can probably guess how obsessed I am with @dietzandwatson’s new meat and cheese inspired apparel line. Such an epic #OOTD 🌭! Dietz & Watson is a premium meat and cheese company celebrating their 80th Anniversary with this delicious apparel 😂. Grab some for yourself to match me at http://bit.ly/stassiootd [bit.ly]#DietzAndWatson #ad

Do Katie and Stassi Want To Have Babies Of Their Own Right Now?

Katie said she was on the baby making train and isn’t hiding her desire to have a baby. She encouraged Stassi to get on the train with her and then they could be jointly annoying with their posts. They even talked of more Vanderpump Rules stars getting in on it.

In an article on Celebrity Insider Stassi had said she was very set on having a baby before marrying her Vanderpump Rules man Beau.

A baby first because she’s, “never been someone to dream about her wedding, but always known she wanted to be a mom.”

Don’t miss new episodes of Vanderpump Rules when it airs on Bravo.