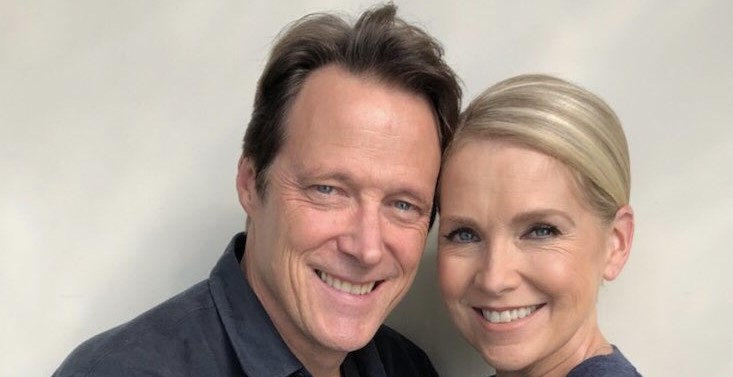 Last week on Days of Our Lives, Kristen (Stacy Haiduk) discovered Xander’s (Paul Telfer) betrayal. She found Ted (Gilles Marini) and Kate (Lauren Koslow) alive and well, stashed in the DiMera mansion. Kristen had ordered Xander to get rid of them, but that wasn’t what she had in mind.

She reveals herself to the captives this week. However, rather than killing them, they strike a deal that pins the kidnapping on someone else.

In return for letting Ted and Kate live, Kristen forced them to tell the cops Stefan (Brandon Barash) held them hostage in the mansion. Stefan, of course, had nothing to do with the kidnapping. He is shocked to be arrested for a crime he didn’t commit.

Perhaps Gabi (Camila Banus) gives him an alibi. By week’s end, Xander is in jail, too. Tune in to find out why.

Ted is the New DA

Things work out great for Ted this week. Eve appoints him the new DA. This might work in Xander’s favor since he let Ted live.

Hope (Kristian Alfonso) has been beside herself with worry over Ted’s whereabouts. She rewards his return by giving him a big kiss. Looks like there’s a new couple in Salem.

It’s not all serious business on DOOL. Xander steals Kristen’s ‘Nicole’ mask. Kristen can’t leave her hotel room without a mask. She realizes she doesn’t have to be ‘Nicole.’ She can be someone else.

DOOL’s Susan Banks Returns and Puts the Moves On Brady

Kristen disguises herself as Susan Banks! As Susan, Kristen kisses Brady (Eric Martsolf,) much to Brady’s dismay. Viewers may find it hilarious.

Until the real Susan Banks shows up. How will Kristen talk her way out of that one?

Tripp Gets a New Roommate or Two

JJ (Casey Moss) loses his apartment. Luckily, Tripp (Lucas Adams) has a vacancy now that Claire (Olivia Rose Keegan) is in the loony bin. Spoilers say Haley (Thia Megia) moves in, too. Will Haley and Tripp discover they have feelings for each other?

It’s the moment fans have been waiting for – the reunion of Jack (Matthew Ashford) and Jennifer (Melissa Reeves) takes one small step forward. Jack finally accepts that he wants his memories back. How will Eve react when he tells her that he’s taken the memory serum? Is it too late for Jack and Jennifer?

Tune in to Days of Our Lives weekdays on NBC for all your fan favorites.