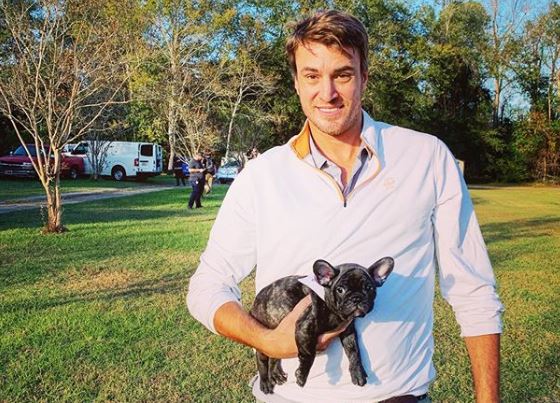 Southern Charm fans recently saw Shep Rose get a new dog he named Little Craig. Fans wondered if he still had the dog and yes he does still own him. It turns out that Shep even went as far as to start his dog his own Instagram page.

First off, Shep Rose asked fans about if they wanted him to make an Instagram page for his dog. Everyone loved the idea so he had to go through with it. Shep hadn’t been sharing about his dog until they introduced him on the show. Now it looks like he has a ton of pictures saved up. Expect to see a lot more over the next few weeks.

The new Instagram page is called Good Boy Craig. It is a new page but has already got a pretty big following. He already has a following of 48K, which shows a ton of people love seeing Shep Rose’s new dog. Shep already has four posts up on the page, but you know more are coming.

This was my original parent Cathy. She raised me and brother’s and sisters till we were 8 weeks. I can’t decide if I remembered her or if it was the smell of new tires, or that is been stuck in the car with @relationshep for 4 hours listening to @sternshow but i was sure good to see Her at #getrdonetires #orangeburg #nostalgicdog

Shep found his own kind of love

Shep Rose of Southern Charm might not be ready for love, but he has found his own kind of love. It is very clear that Little Craig is good for him. Having a dog gives Shep a reason to come home at night and get up in the morning. This is clearly something that is good for him. Little Craig has made a great addition to the show as well.

Are you happy to see that Shep Rose still has Little Craig? Do you follow him on Instagram? Share your thoughts in the comments below. Don’t miss new episodes of Southern Charm on Bravo. You know Little Craig will be showing up on future episodes. So far, he doesn’t seem to leave Shep’s side.