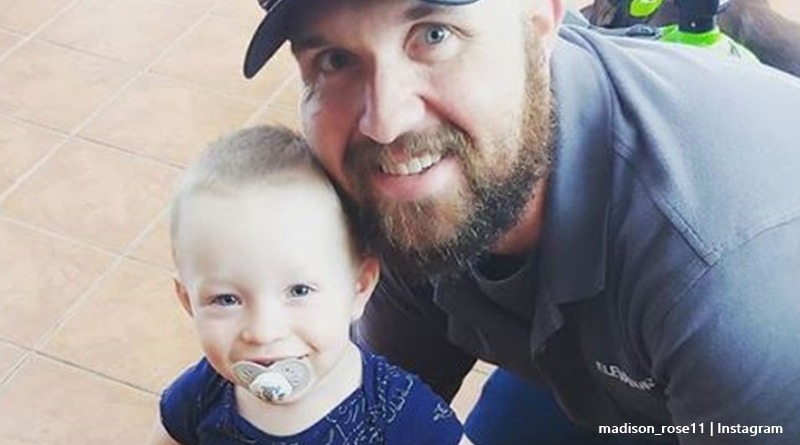 Sister Wives fans know that Maddie Brown Brush expects her second baby this year. Little Axel, shortly to become a sibling’s growing up and he’s in that mischievous stage of the “terrible twos.” The cute little grandchild of Kody and Janelle Brown is becoming quite the personality. Maddie shared some of his antics on her Instagram Stories.

Sister Wives baby boy Axel’s not such a baby anymore

Axel, born in 2017 is growing his personality and he’s at the delightful age where kids swing between testing the limits to really cute moments. Maddie often shares about her son on Instagram and now she shared him being a bit mischievous. In one clip, she showed Caleb and her trying to take a nap. She captioned that with, “All I want is a Saturday nap. All Axel wants is to climb all over us.”

In the picture, Caleb looks sleepy, Axel looks anything but. He’s hanging onto his mom’s shoulder. In the next picture, Maddie told Sister Wives fans, “So much for naps!” That one showed Axel and his mom. In it, Axel’s sticking his tongue out at the camera. The expression on his face is too mischievous. Obviously, he just wants his mom to get off that bed and play or something.

Maddie’s expecting her next baby to come along soon. People revealed in April, that Maddie and Caleb expect a little girl this time around. At the time, Maddie said about Axel, “Axel doesn’t really understand yet, so we are sure he will just be happy to have someone to play with.”  Well, until his little sister grows up a bit, little Axel could continue to try and get mom to play. Once the new baby comes along, hopefully, Janelle Brown can help out with the mischievous little fellow.

Recently, at 32 weeks along, Maddie shared a photo of an ultrasound. It’s so clear that fans of Sister Wives could see the actual features of her new baby very clearly. Maddie asked them who they thought their daughter resembled. Some of them thought she looks like her brother Axel. Others said they could see Caleb in her face. One fan commented, “She’s beautiful Maddie! I’m in [Awe] of the Ultrasounds done now. She’s an Amazing miracle too! Axel will be a great Big Brother! Take care 💐♥️🤗🙏🏼.”

Baby Girl Brush. 💮💮 Who do you think she looks like? Caleb or me? . . . . #babygirl #32weekspregnant #brushfamilyof4 #babybrush #3dultrasound #thosecheeks #momlife #mommyblogger

For now, Axel can’t understand being a brother

In Maddie Brush’s chat with People, she mentioned that Axel’s too young to understand what’s going on. She also said that maybe he’ll feel a bit “jealous” initially. However, she’s confident that in time, he’ll be happy to have a sibling.

What do you think of Axel being such a mischievous toddler? Do you feel for Maddie Brown Brush? How did you cope with your child at this age? Sound off your tips in the comments below.