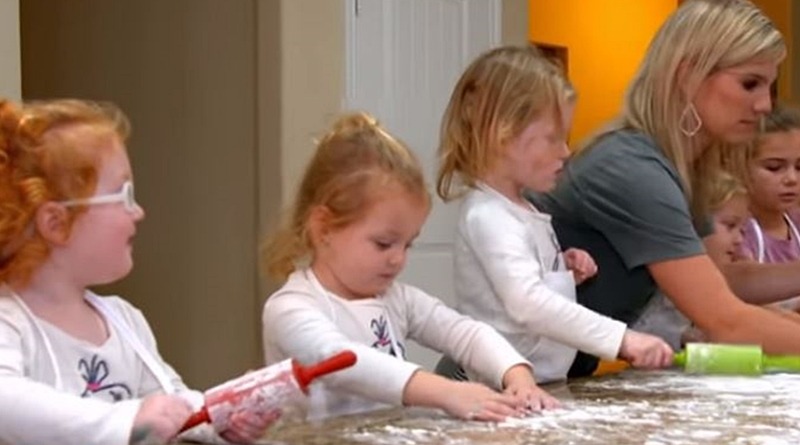 OutDaughtered quints plus Blayke mean the Busby family adds up to a lot of people when running errands. Adam and Danielle Busby posted to their itsabuzzworld account on Instagram about their recent shopping trip. The girls looked happy and excited as they got to choose either a smoothie or a big cookie at the mall. Plus, they went off and did some other shopping to get stuff for the kids’ rooms.

In their Instagram Stories, Adam shared that he and Danielle took the girls out on some errands. They decided to stop off for some smoothies. Now, you don’t promise six little girls smoothies and not deliver! So, Adam looked a bit weary as he said they stopped at two smoothie shops. Apparently, the first one doesn’t take cards. So, they looked for another one, but that one no longer sells smoothies. Finally, the OutDaughtered family ended up at the mall.

In the mall, the children look happy, as, despite the delay, mom and dad finally found the smoothie place. The video shows the girls sitting along the front of the cake counter. Well, it certainly herded them into one place, because who runs away from a cake counter? Well-behaved quints and sister Blayke munched on giant cookies. So did Danielle, who opted for chocolate. Meanwhile, Adam said that he preferred a smoothie.

Asking the quints to choose a cookie or a smoothie’s a hard call in a way. Most kids would want both. However, the Busby family kids selected their choices and tucked into them. Riley chose a smoothie like her dad. The rest of the girls chose their cookies. Adam asked Riley if her smoothie was tasty and she said “yep.” But, maybe she also wanted a cookie as an off-camera little voice later asked Danielle if she could “have a bite.”

The next mission for the OutDaughtered family involved buying some things for the bedrooms. The quints hopped into two shopping carts. With Danielle and Blayke pulling one, and Adam pushing the other, it looked like a train of little girls. Excited voices chirped away, about “unicorns, llamas and princesses” and other things they saw in the store. It looked like Danielle hoped for some pictures to hang.

It looked like the girls thoroughly enjoyed their shopping day out. Danielle actually looked a bit tired at one stage. Maybe each kid wanting their own preference seemed a bit overwhelming. However, Adam kept the girls engaged, and Riley admitted along with the others that a “llamoo” sounded great. Possibly, in an upcoming season of the TLC show, we’ll see the newly decorated girls rooms.

Could you imagine shopping with six kids? That would be a nightmare for some people. However, the Busby family kids were well behaved and happy. Perhaps getting a chance to choose between a smoothie and a cookie put them on their best behavior. Do you shop with multiple kids? How do you cope with it? Share your ideas in the comments below.