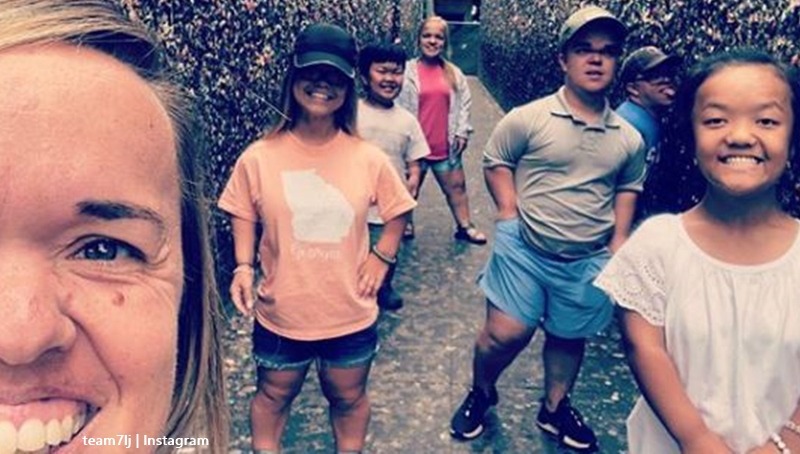 7 Little Johnstons family recently went on a vacation and shared that news on Instagram on June 21. Now, it’s time to head back home from California. Posting photos of their vacation, Trent hinted hugely that they currently film for a new season on the TLC show. In fact, it seems a show producer accompanied them.

The flight out of Delta Terminal – Hartsfield-Jackson Atlanta news came on the official Instagram account for the show. They departed for California on June 22. Tori Roloff of Little People, Big World commented, asking if they would be there next week? The reply was “yes,” and that’s fun because the Roloff’s may have been in the area at the same time.

The next photo’s of the vacation showed them hitting the road in a rented RV. It was captioned with, “RV’ing it…Day 2 and we still love each other.” June 25 we saw a lovely photo of Trent and Amber standing on the beach in Morro Bay, California. Next, sharp-eyed fans of 7 Little Johnstons identified them at the San Luis Obispo’s Bubblegum Alley.

Vacation photos came out and one showed a producer photobombing

The vacation RV trip finally ended and the family left town with more memories from San Francisco. Before their departure, the team7lj account shared a lot of pictures of them as they readied to leave. There were ten photos in all, and most of those showed the family posing on their various California travels. But photo number five drew some curiosity.

In that picture, a man wearing dark glasses and a checked shirt, carrying a small backpack photobombed the family. Fans started asking who he was. Trent, on his personal IG account, answered them, saying in one word, “Producer.” Well, that’s excellent news if you can’t wait for another season of 7 Little Johnstons. That’s a major hint that we can expect one.

It’s not likely that the producer would go along with the family if they were not filming for a new season. That’s great news for fans of the show. Hopefully, we may even see them catching up with the Roloffs in California as well.

What do you think about the photobomb picture with the producer in it? Are you happy that Trent replied, confirming that? Are you ready for a new season? Sound off your thoughts in the comments below.