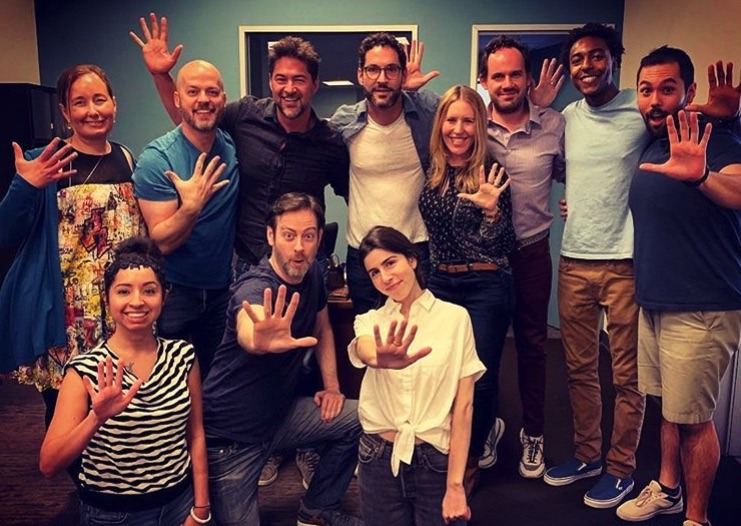 The Lucifer writers are now gathering together as they kick off brainstorming for the fifth and final season of the Netflix show. Tom Ellis, who plays the devil himself has already been joining in. What is the timeline for the show?

Lucifer co-showrunners, Ildy Modrovich, Joe Henderson, their team of talented writers and devilish lead, Tom Ellis, are already hard at work at plotting out the course of the final season of the show. Tom posted to social media a photo of the two showrunners, eight writers and himself with the optimistic caption, “First day at the writers room for #luciferseason5. Everyone is very excited about the possibilities…I can’t wait! 😈#Lucifer”

Although the show won’t start filming for a few weeks, it is clear that the writers have their work cut out for them. Season 4 ended with Deckerstar separated. Chloe expressed her love, with Lucifer Morningstar not actually saying the “L word,” but indicating his true heart, only to have Lucifer return to Hell to preside over the tortured residents.

It is pretty clear that the first item on the writer’s agenda is getting Lucifer back to Los Angeles. How are they going to do that? Sounds like the whole team really need to put their brains together to come up with a unique and hopefully romantic rescue from Hell. Could this be why Tom Ellis seems so involved with the process this time around?

Tom Ellis didn’t just show up on July 1 to hang out with the Lucifer writers. He, along with co-showrunners Ildy Modrovich and Joe Henderson hung out at the classic LA eating establishment, The Smokehouse. According to Modrovich’s tweet, the trio was there to “drink and eat cheesy bread,” and “brainstorm” at the Burbank restaurant, located on the edge of the Warner Brothers studios.

Hopefully Tom’s personal trainer Paolo Mascitti doesn’t get wind of the crazy carb loading. This team needs the extra calories to accomplish the Herculean task of writing a fan-satisfying, series-ending season. They need to tie up loose ends and answer some questions. Most of all, fans have been waiting for a satisfactory romantic conclusion between Chloe and Lucifer.

As for the writers, they surely want to end the show with a bang. The pressure is certainly on, as the Game of Thrones finale suffered a lot of Lost comparisons. How they end the show will really define the entire series. No pressure here!

No place better than The Smokehouse to brainstorm about #LuciferSeason5 …and drink and eat cheesy bread. pic.twitter.com/HXeZmeDQtE

Netflix renewed Lucifer on June 7. The good news is that fans got a Season 5. The bad news is that this is the final season. Both the showrunners and Ellis have promised that final season will be “awesome.” This will surely be bittersweet for a cast and crew that clearly love working together. Each episode will certainly be a labor of love.

Lucifans should be delighted to see how this talented team ties up all loose ends and ends the show their way. Filming for the ten final episodes should start sometime in late July/early August. Each episode will be the normal 50-minute length. Ildy has promised that they will look into a blooper reel, could they include other bonuses for Lucifans?

Lucifans, what do you want to see happen in Lucifer Season 5? Share your hopes and ideas in the comments field. Be sure to check back with TV Shows Ace for the latest on Lucifer. Netflix should drop 10 epodes of Lucifer Season 5 in spring 2020.

‘Edens Zero’ Season 1 Netflix Release Date: What To Expect
‘Bringing Up Bates’ Preview: The Family Is In For A Huge Shock
‘Counting On’ Fans Worry About Jill Dillard’s Dog – What’s Wrong?
‘RHOBH’ Fans React To ‘The Housewife & The Hustler’ Premiere
ABC Confirms Rotating ‘Bachelor In Paradise’ Hosts, Including David Spade